Note: this review has been edited reflecting better (working) test samples. Thanks to Boley for sending them out for free, and for looking through the batch numbers to try and pin down what went wrong!

The Electro Surge is a nice callback to classic soaking, with the tactical shape (though thankfully bright colors) and a battery-powered mechanism. It doesn’t compare to the soakers we love to use, but it hits 20′ at the press of a button. For $10, it’s a great option for the little kid that just wants something that fires a stream on command.

Judging just from the looks, the blaster is certainly appealing. It’s brightly colored, but has the shape of a bullpup firearm. The front grip is admittedly a bit odd, and larger hands will find the main handle and thumbhole uncomfortably small, but smaller hands and kids would be right at home. The “magazine” in the back is just decorative, with the blue reservoir being the stock of the blaster. So long as you have a slight angle, all the water will feed from the end of the hose at the rear of the reservoir. The plastic does feel “cheaper” than that in soakers from the main blaster companies, but that mainly comes down to a different plastic being used. For what needs to be accomplished here, it’s more than sturdy enough.

The blaster runs on 4AA batteries in a watertight compartment in the front. The trigger, meanwhile, barely moves, as it sits next to a simple contact switch. 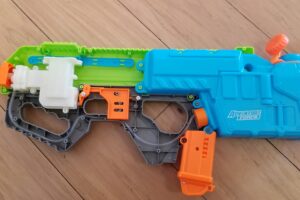 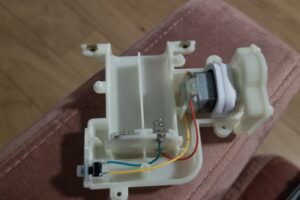 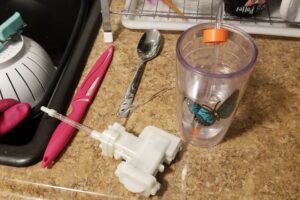 After blasters one through three refused to fire, I gave up and decided to open them up and see what was going on. The blaster (in theory) has one motor driving a basic gear pump – water should flow around the outside of the gears as they spin, and go from the inlet side (reservoir hose) to the outlet side (nozzle). The sucking action should draw a vacuum and bring water forward for firing…but it didn’t. Even if I did something silly like suck on the nozzle to prime the pump manually, it would not fire – the gears just spin in place without any water moving. Clearly, the pump casing didn’t actually seal against the gears. After emailing back and forth with the manufacturer, I ended up getting samples from a different area; quite literally they were taken off a Walmart shelf in California and mailed to me.

Once I had new samples in hand, these worked quite well. Sure, you’re only firing a few mL per second, but 4 AA batteries can only do so much pumping. The blaster didn’t appear to bog down when the trigger was held down for an extended period.

Hardcore water warriors will obvious opt for something with more power. Some tinkerers, like me, will end up using the shells as platforms for silly Nerf creations. For the rest of the consumer base (aka parents and their kids), though, the Electro Surge should be a good option for starting out. Sure, $10 only goes so far when it comes to launching water. But having a consistent stream at the press of a button is handy, especially for beginners.

Just make sure you have batteries on hand!