As we saw at the end of 2019, Little Tikes released a line of blasters aimed towards a younger crowd. Granted, you’re essentially lobbing bean bags, but it’s quite a nice series of toys for the target audience. Now, as we start 2021, we’re actually seeing new entries to the line! 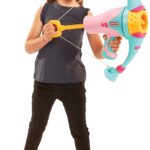 The original blasters featured both girls and boys on the packaging and promotional material. However, Little Tikes has elected to rerelease the Mighty Bow in pink and light blue, naming it the Power Bow. I know we’ve been down this road before (Nerf Rebelle comes to mind), but perhaps the marketing says at such a young age, having a girl-oriented blaster would result in more sales. That’s just for me to speculate. 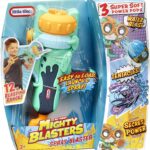 However, we’re not just going to see recolored blasters. There’s also the Spray Blaster, which appears to add a small reservoir, as well as a nozzle beneath the main barrel. I wouldn’t expect to be getting Super Soaker ranges, obviously, but it’s a cool next step for the line, especially once the weather starts warming up. As of this writing, the item didn’t appear to be in stock in the United States, but I imagine that will change soon enough.

I don’t expect a review of these to end much differently than that of the first blaster I tried. Even so, I’ll grab one at some point. Flinging giant ammo is always fun!