It’s official: Hasbro’s design team has gone off on a tangent for 2021! We can now relive the glory days of the 1990s, when blasters were made to look like animals! Let out inner little kids rejoice!

All joking aside, the basic blaster in this new line is a fun departure from the Elite 2.0 aesthetic, even if it takes those assembly cues to a whole different level. Don’t expect to be modding your blaster anytime soon; just enjoy having a blaster with a fun new shell!

The Stego-Smash is a simple blaster, essentially the Firestrike of the line. Load a dart in the barrel (there is storage for four more darts, for five total), pull back the plunger, and pull the trigger. The main handle is decently comfortable, with room for all the fingers, and the knuckle guard isn’t too close for comfort. There’s minimal paint, aside from the Nerf and Dinosquad logos on one side. The rest is just differently colored plastic.

The dinosaur look on this blaster comes from the large stegosaurus spine (made of what appears to be rubber) and the face/eyeballs. It’s quite serious, and I love it. Sure, it’s still not a good idea to accidentally hit someone with the spines while running around in battle…but it’s a far better effort toward safety than the hard plastic on the Halo Mangler. It’s the right amount of serious but goofy for kids – and grown up kids.

My blaster averaged 70fps, what you’d expect for a standard Nerf blaster (I should note one other reviewer was averaging 10fps less with his blaster). As a standard rear-prime blaster, you can easily fire off one dart every two seconds with it. 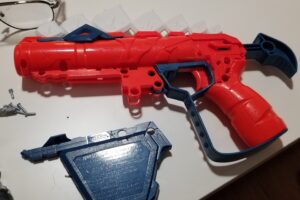 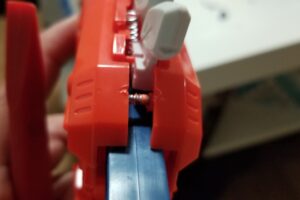 This one is a bit ugly. Among the Elite 2.0 blasters, large plastic clips and solvent welded supports were common, even with a few screws here and there. In this case, however…posts are solvent-welded all throughout the blaster, with only a few small plastic tabs on the edges of the grey plastic. Solvent welding is the predominant method for assembly, with a couple ribbed metal pins thrown in to boot. I think it’s safe to declare that you’re NOT going to be modding this blaster without, at minimum, severe damage, unless you get extremely lucky. The modder in me is disappointed, of course. But this part is extra to the review; a parent in the toy aisle usually doesn’t care about being able to swap out springs and such.

Granted, this blaster feels much better in hand than the Elite 2.0 blasters. But taking apart is worse.

If you’re looking for a blaster that looks cool and performs reasonably well, the Stego-Smash fits the bill. $10 gets you a Firestrike with dart storage and a fun dinosaur-themed shell. If you’re looking to mod this blaster, of course, you’ll be disappointed. For the rest of us, though, it’s a fun break from how serious most of the recent blasters have been.

It’s shown up early on Walmart’s website, but expect to see it in stores soon!