EDIT: After buying another and having it actually fire straight, I can raise the score some. But not as high as it could be, due to QA issues.

It’s a new year, and already we’re seeing new blasters on shelves! In this case, it’s the Stryfe of the Ultra line. The Amp moves Ultra farther into the mainstream in terms of combat usefulness. However, due to a fun performance issue, it seems like Ultra flywheelers still aren’t quite there yet.

Let’s get the main issue out of the way: this blaster constantly and consistently shoots to the right of whatever you’re pointing at. It’s still early in distribution to know whether all models do this, but the only other person I know with one also sees the same issue. Many Ultra 2 reviewers had issues with their blasters shooting to the right. (I seemed to just have general accuracy issues) At the time, many Ultra 2s didn’t have flywheels lined up with each other or the darts, so performance issues were easy to blame on that. In this case, however…everything looks lined up properly. Nothing seems out of the ordinary. The blaster just…shoots right. You can account for it, yes, but in the heat of foam-flinging combat, that’s a rather larger hurdle to overcome.

Hasbro, please note: it looks bad when your blaster has an integrated sight that’s completely useless due to the blaster not shooting in the same direction.

As for the rest of the blaster, it’s not as bad as it could be. The blaster still has the main grip that’s too small, although at this point most of us have gotten used to it. In this case, the front grip actually helps. Not only is is serviceable, but it also means less need to tightly grab the main handle. As such, it’s not as uncomfortable.

The blaster, as mentioned, has a large site at the front. There’s also a tactical rail behind it, although the curious placement makes it essentially worthless. An NStrike stock attachment point sits at the back. The right side has an extremely large Ultra gold logo, loudly proclaiming the blaster’s identity. As usual, the left side isn’t nearly as colorful.

The magazine release is somewhat stiff, but doesn’t need to move far to let go of the six dart magazine.

You need six AA batteries to power the blaster.

As a semi-auto flywheel blaster, it’s easy to fire three darts per second, albeit with diminishing velocities. When fully revved, the blaster averages 107fps. Which is quite useful, although you need magazines and ammo to feed the blaster. Spare Ultra magazines are coming soon ($20 for a ten dart magazine, I think?), but until then you need magazines from the Ultra Pharaoh. Which is $50. Yeah, Ultra as an ecosystem adds up quickly. 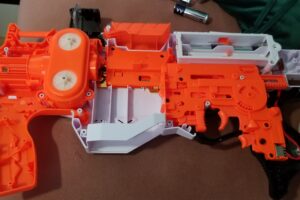 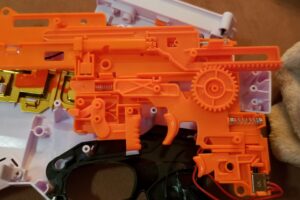 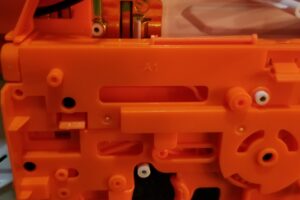 The Ultra Amp is setup like a Stryfe; the rev trigger feeds current to the motors, and the main trigger throws a pusher forward. In this case, there’s a geared pusher that feeds pretty smoothly. There are real metal springs in most places on this blaster, aside from the magazine release. In that case, there are twin plastic leaf springs, and the movement needed is minimal.

There is a dart detection system similar to that of the Ultra One – if a button on the pusher isn’t depressed, a catch will block the pusher from fully moving. There’s also an extra dart flap in front of the flywheels, and it only lifts if that button is depressed. 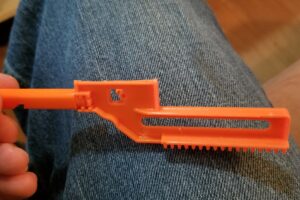 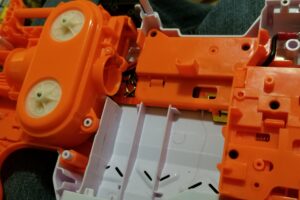 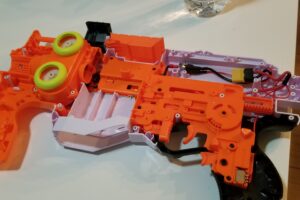 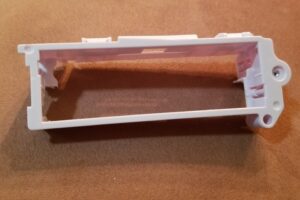 As for modification, there’s room to make the blaster do quite a bit. First, it’s easy to rewire the motors; as long as your soldering and wiring is clean, it’ll fit without shell cutting. Second, after you’ve removed the “Dart DRM”, you should shave off the pusher arm extension that moved the dart flap out of the way. Doing so frees up room in the shell for a lipo battery.

There’s an orange plate above the magazine well that this pusher extension travels under; it makes for a great channel for large wires. You’ll also want to remove the bulk of the stock battery tray (don’t lose the nut that secures the stock battery door!).

Finally, the stock cage vibrates (it clips together, and fits a bit loosely in the shell). I dismembered two Vortex discs and glued the foam in place; the blaster is much quieter now. On a 3s battery, I’ve averaging 152fps. Of course, I’m still launching darts to the right, and the increased velocity is further exaggerating the (nonexistant) flight characteristics of Ultra darts. But it’ll be much more useful in superstock wars – assuming I accurately account for the rightward trajectory.

Modifications aside, the Ultra Amp feels like another case of stepping forward and back again. Yes, it does make for the next logical step in blaster development, bringing a mag-fed, semi-auto entry to shelves. However, for a line touted as having improved accuracy (not to mention a blaster with a large, built-in sight), shooting to one side is a major disappointment. And honestly, I’m not sure why it’s happening. Is Ultra just too flawed for flywheels? Do we just need to tilt the flywheel cage to compensate for this silly development in the future? I have no idea. What I do know is that, for $30, there are mag-fed, regular dart-firing blasters that perform far better – if not in stock fps, then at least in consistently accurate fashion. I was hoping this blaster would help make Ultra a more viable ecosystem, but it would seem otherwise.