Sometimes fun modding things come along that completely change the blaster they’re using. For competitive Nerf, that usually comes in the form of a short dart conversion. However, this is the first one I’ve seen for Ultra blasters. As such, it was worth a look, especially since I had a spare Pharaoh.

It’s not quite perfect, but it makes for a great high fps blaster with the “sniper” feel! 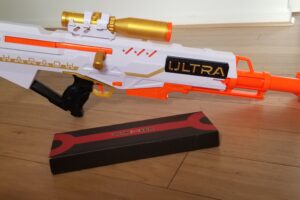 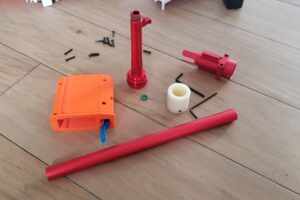 The entire kit comes in a single box, long enough to accommodate the new barrel and various other pieces. Also included is a Talon adapter for Ultra magazine slots – this particular one seemed a bit of a tight fit in the blaster, and the retention tab didn’t seem strong enough; at least twice in testing, my Talon magazine fell out while priming. At minimum, a stronger spring is needed! The magazine also seems to sit too high, but seeing as I’ve yet to experience a jam, appearances could just be deceiving. 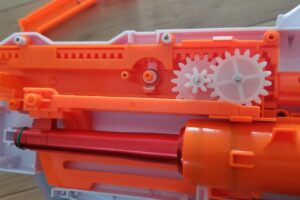 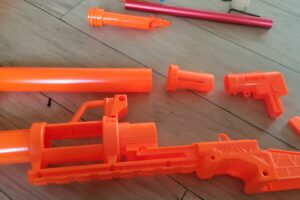 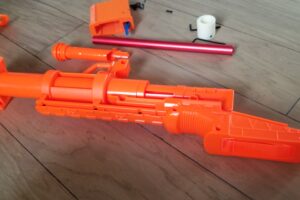 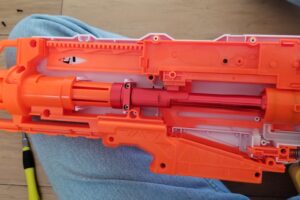 As for the replacement parts, they were mostly trouble-free. The pusher swapped out easily, although it does require some disassembly to separate the plunger and breech from the gear train of the priming system. The barrel is easy to install, and if you leave the barrel spacer back a bit, there’s room to add a scar barrel. The dart gate, however, was slightly too wide to fit within the existing supports! The block you tighten down to secure the end of the barrel was a tad wider than the supports on the screw side of the shell. I simply tore out those supports, seeing as everything was secure. But it’s annoying to need to do that for a “drop-in” kit.

Final results? I’m averaging 168fps with AF Pro short darts, using the stock spring! I’ve heard of much higher numbers with heavy replacement Kronos springs, but have yet to try that. In any case, I’m shooting darts hard enough that the faux scope has started to become useful for aiming. That’s always a good sign. 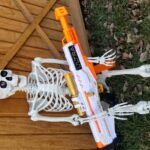 The kit could use a bit of tweaking on Worker’s end, but even so, it’s perfectly usable in its current form. And it results in great performance that really gives you that sniper feel. If you like the shell but aren’t a big fan of Ultra, it might be worth a look!

Just be aware that if that’s the case, you’re spending $40+ on an already $50 blaster. So you might want to get the Pharaoh on sale or secondhand first!