I’ve done a lot of searching over the past week, finding various fun bits of news and posting in Nerf groups. But I should probably write up summaries of what I’ve found this week, so they’re all in one spot!

Hasbro has an interesting patent for “jump starting” flywheel blasters. Worker (the third party mod parts and occasional blaster company) teased a new flywheel blaster, but also filed a design patent for it. And that new Adventure Force soaker from Dart Zone? It’s a newly patented system, as well! Let’s dive in!

US Patent 10,876,809 B covers various implementations of a quick-start mechanism for flywheel blasters. Many pictures show a modified Rapidstrike; however, don’t get too excited just yet. I would assume Hasbro engineers just used one as a testbed for demonstrating the idea. One using LOTS of gears. 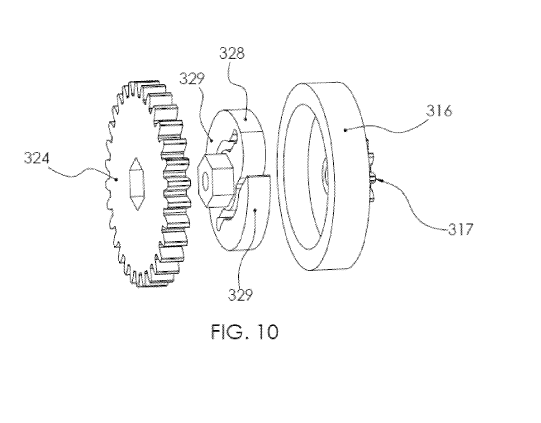 The core idea is using stored energy in a spring to jump-start flywheel rotation, but several other ideas are demonstrated, ranging from using one motor to power everything to one trigger operation. The latter, of course, requires a way to not jam a dart in the flywheels – and we’re talking Walmart shelf, alkaline-powered toys, not microcontrollers or motors with insanely high torque. In this case, the gear train includes a centrifugal clutch that only transmits power to the pusher mechanism once the flywheels reach a minimum rpm setting.

Of course, the end goal for many of these things is saving money, as reducing the number of motors makes for lower costs in manufacturing. The patent, however, does recognize that things like rev triggers are important for gameplay and wanting instant firing, not just faster firing. So

Worker Makes a Blaster To Match the Magazine

Worker, the company that many Nerf enthusiasts know for mod kits, darts, and some of their own blasters, teased a new blaster on their social media, to be released after Chinese New Year. However, they’ve also filed a design patent, so we have an idea what it looks like (the final thing isn’t guaranteed to 100% match). It uses the angled Talon mags, fires short darts, and (based on the mag dimensions) uses Hurricane-size flywheels.

I’m sure it won’t be long until they reveal the actual product. We will continue waiting…

Earlier, I reviewed the Adventure Force Water Strike Hydro Burst and looked at its unique priming and firing mechanism. Apparently, it’s unique to the point that it’s being patented. No news yet, however, if it’ll be used in dart blasters as well!