Overnight (while I was sleeping, of course), news leaked out from internal Walmart product pages about upcoming blasters. Less than twelve hours later…Adventure Force Brand is already leaving comments on various Instagram posts, so I guess it’s official!

Not only has the next Pro blaster been revealed (and it’s definitely unique), but a new ball blaster and two other, colorful entries. Let’s dive in!

The Conquest Pro fires exclusively half-length darts, and claims the same ranges as the Nexus Pro. It also comes in at $40. However, it’s also tackling a mechanism I never expected to see in a store blaster: rear-loaded magazines. And I don’t mean the magazine just sits in the back, like it would in a Rayven. It’s literally inserted into the back of the blaster, with the darts pointing up! A lift mechanism takes the top dart out, and presumably lines it up with the plunger tube and barrel. The reliability of this has yet to be seen, but given that it’s being released for the Pro line, I have to assume it’s had rigorous testing.

I do wonder if having the magazine towards the top would have been better to use (slap into the channel, and slide forward), but we’ll have to wait until later in the summer to see how well it works! Keeping fingers crossed that it appears on shelves early.

The Rest of the Lineup? 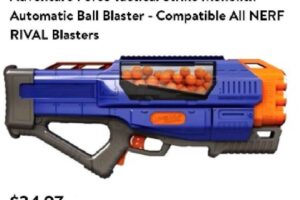 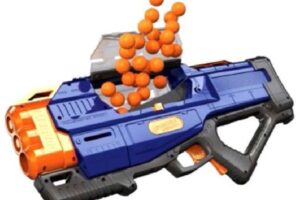 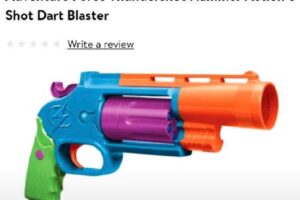 Even with Hyper becoming a thing, it seems Rival isn’t dead yet! There’s a new hopper-fed blaster, the Monolith, coming to shelves, with a generously large side-loading door. There are also two (presumably Buzz Bee, based on design) blasters with unique features. The Thundershot has hammer prime (but a really small grip, it seems) and the Tetrashot is a shotgun that isn’t a shotgun? According to the box instructions, it only fires one dart at a time. It would seem they wanted to expand capacity without making an absurdly long chain.

I’ll keep my eyes peeled for these…and anything else that may pop up. After all, without Toy Fair and other events for announcing products, what’s actually coming out is very much a mystery compared to past years!