Author’s note: Thank you so much to Zing Toys for the free samples!

It’s always hard to review and rate things like this, especially when you’re over 30. The Wrist Bow is inherently kid-sized, and sometimes you have to borrow other people’s kids to properly gauge expectations!

Even so, it was easy to see, when I used it, how much fun a pint-sized entry to the Zing family could be!

When I get a new product, of course I’m going to try it, and run it at a war. However, in adult hands, the Wrist Bow is a bit tight. I can still manage to squeeze my hand through the grip on the underside, but I’m odd in how I can contort my hands and just make things work.

Perhaps that’s why it’s better to listen to other reviewers when they complain about bad blaster grips. ANYWAY…

Regardless of how I use blasters and other toys, the Wrist Bow is clearly designed for younger kids, as an introduction to the world of bungee blasting. There’s a fstrap with a grip you stick your hand through (and thumb around), and a velcro strap at the back that you loop around the wrist. For properly sized hands, it works.

The underside of the Wrist Bow features two clip-in ammo holders, each holding the shaft of a spare arrow. (Three arrows are included with the bow). Each time you go to fire, put the notches on each arrow through the respective bungee loops, pull back, and release! It does take a few seconds to properly align things, so don’t expect insane rates of fire.

With 45′ advertised ranges and a target on the other side of the package, it’s clear this isn’t meant for combat. HOWEVER…since when did that ever stop me? 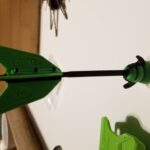 In use, the Wrist Bow isn’t the most war-worthy toy (stretching the bungees out as far as I could just hit 45′). Especially when stock blasters on shelves these days can hit from much farther away. But the arrows still have a satisfying impact on target.

Note that the arrows all have suction cups, and do stick to flat surfaces. So even if you’re by yourself, there’s plenty of possibilities for target shooting.

The Zing Air Storm Wrist Bows have been sitting in my gear for a while, waiting to be reviewed. But a recent outing, with actual kids in the group, meant I could break them out for the kids to try – and they enjoyed them quite a bit. It’s a good reminder that sometimes, you just need a second opinion before you can really put a review together.

The Wrist Bows aren’t something I would have bought for myself – I don’t often have a time where I can use them. But they’re the perfect thing for target plinking with the kids, before they’re old enough to try those Hyperstrike Bows. Sometimes I do get a little hung up on “How useful is this in a war?”, and forget to just use and enjoy things as toys!