Xshot introduced the Royale Edition Chaos Blasters back in 2020, with an appearance at Toy Fair – right before the pandemic hit. Even so, it would seem that the idea sold well (and the all-gold blasters in social media promotions certainly helped). Now, we’re seeing the concept extended to dart blasters in the main Excel line, ranging from pistols all the way up to a chain-fed blaster. In my case, I found the Reflex 6 online at Walmart, and just had it delivered to my house.

The blaster doesn’t do anything new. However, it also doesn’t have to. Even if it’s slightly more expensive (for a budget blaster, that is), it’s a solid performer that will serve well in any Nerf war.

The blaster doesn’t actually take that much space. However, Walmart saw fit to ship it in a huge box. On the one hand, that’s a waste. On the other…the cats have a new toy. 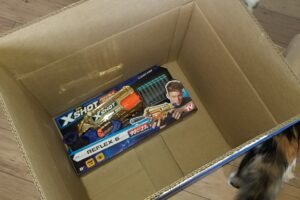 The Reflex 6, if you’ve seen the old review, can be found alone or in combo packs at various price points. Ideally, however, it’s found for $7 to $8 by itself. Paying the extra few bucks for the additional gold coating, all things considered, is still quite inexpensive.

The blaster fits adult hands quite comfortably, with enough room on the handle and molded ridges that make for a better grip. The priming handle is easy to access and pull. Yep, it still rotates the cylinder on the prime, just like before.

There’s not much more to say about the blaster, since it’s the same model in a different color. Even so, I’ve found myself liking the Reflex 6 more after several years of seeing (and using) it in wars and Humans v Zombies missions. It’s inexpensive, and it works!

I do, however, want to see what the actual TV commercials are. I have some ideas if they’re open to suggestions…but those ideas are probably terrible. I’ll save that for Beret’s TikTok…

If you don’t already have a Reflex 6, you may as well pick up the special version while you’re at it! It’s still quite affordable, reliable, and everything you’d want in a basic blaster pistol. This one just happens to be prettier!