The Tomahawk 60 came out this summer to relative fanfare…and somehow I completely skipped over writing the review. Which is a shame, because it’s one of the best blasters Dart Zone has on shelves. Whether you’re looking for backyard blasting or a cheap Humans v Zombies primary, the Tomahawk 60 is a great choice. Assuming you’re old enough to support using it for a length of time.

Large and in Charge

The Tomahawk 60 comes in quite a large box. Once assembled, it becomes apparent that it’s not a toy for small kids. There’s only so many ways you can cram 60 darts into a cylinder, after all. Dart Zone ended up making a taller blaster to compensate; with the front grip so low, you don’t need to contort your arm around the cylinder. But that’s still a lot of plastic to point downrange.

The size also means there’s plenty of room for the main grip, and most hands.

This largeness issue is compounded by the mass of the cylinder itself. A manual blaster is one thing – once you’ve primed it, the platform is steady for firing. For this semiauto flywheel blaster, however, you have to rotate the drum before firing the next dart. With a giant drum, fired rapidly, that translates into a fair big of angular momentum when trying to aim straight…as well as a somewhat stiff trigger pull. For older kids and adults, that’s an issue easily handled. Younger kids, however, might find it frustrating.

On the other hand, the drum is quite innovative. It’s removable, making drum swaps quite easy to do. It also can load two darts in each of the thirty “spokes” of the wheel. Think of it as having a blaster with 30 two-dart magazines. An orange,  spring-loaded follower sits above the drum, pushing darts down and lining them up with the pusher arm. The drum is also largely free-spending, given a little force. It makes reloading on the fly easy, but barring any hardcore parkour, you shouldn’t have the drum turning by itself.

There’s also an NStrike attachment point on the back, should you decide to add a stock to stabilize your shots. That’s a nice touch, and it’s quite useful given the issues stated above.

Blaster Use and Performance

Performance is quite impressive, with an average of 93fps with the included red diamond darts (“chili darts”). Rate of fire, however, does suffer a bit. the stiff trigger pull to rotate the drum slows you down, but two to three darts per second is still possible. 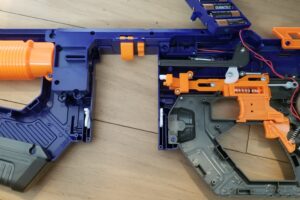 The Tomahawk 60 is an interesting beast. Electrically speaking, the wiring is the same as any other semiauto flywheel blaster. The flywheel cage, however, is totally different from previous Dart Zone offerings. It’s a large plastic subunit that also houses the drum indexing and the dart follower. Due to time, I never got around to making a replacement cage. However, TR blasters did, and you can print them yourself or buy them on Etsy.

The Tomahawk 60 is everything you’d expect from Dart Zone. It’s unique, does something new, and has high performance. Assuming you’re large enough to handle the blaster, it’ll work for stock wars and Humans v Zombies games, and could potentially do more. And for just $30, it’s a total bargain.