Not everything has to be a “rifle”. Flinging projectiles at friends takes many forms, and sometimes you just want to dump in some rounds and go. That’s what the SRB 375M is for.

It doesn’t have the capacity of larger, magazine-fed blasters. Instead, the SRB 375M is the “machine pistol” of the Splatrball lineup, dumping rounds from a hopper. Is it as viable as other blasters in the line? Depends on how close you can get. Is it still lots of fun? Of course!

Are You Sure That’s a Blaster? 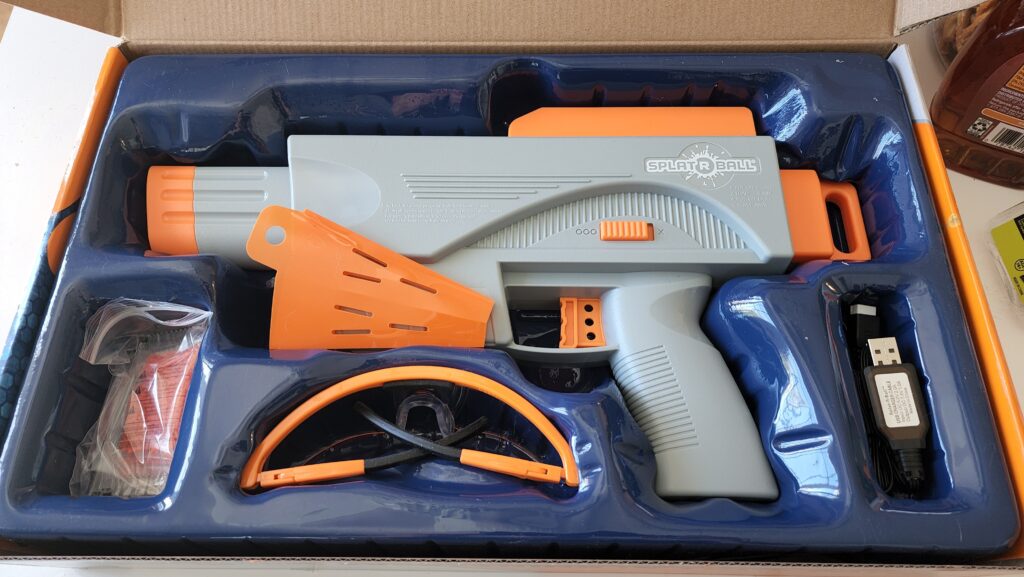 For real, though: the SRB 375M (M for “Mini”) gives me serious MAC-10 vibes, even though I know it doesn’t quite match that silhouette. One thing is for sure: it fits that role in the casual gel ball battlefield. In the package, the 375M comes with ammo, a small funnel for loading hydrated rounds, safety glasses, the battery, charger, and a sling point. If you have other Splatrball stocks, you can mount them in place of the sling point. By default, however, this is a blaster meant for running and gunning – possibly with one in each hand.

The 375M is surprisingly comfortable to hold, and light as well. The trigger is responsive with a short pull, and ridges at the front are enough for gripping with your off-hand. Of course, without any iron sights, you’re simply spraying in the general area, even when using both hands. Note that there is no semi-auto to speak of. There’s only off and full-auto, as the switch above the trigger shows.

The blaster loads via a port on top of the shell (in the orange area); that’s what the included funnel is for. The nominal capacity is 375 (who could have guessed?), though over 400 is possible. However, overstuffing can lead to feeding issues until the capacity is used up a bit. Stick with the recommended amount. 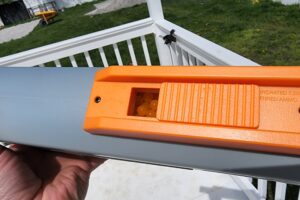 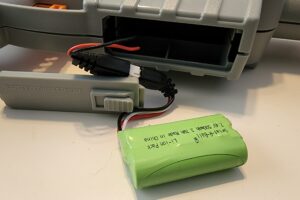 The battery for the 375M is smaller than those of other Splatrball products. Granted, you’re running a single motor, and the spring load isn’t quite as demanding. Still, a 500mAh 2s battery means you have a limit to how much blasting you can do before a recharge is needed. When you notice the rate of fire slowing down, it’s time to recharge, and that will depend on how trigger-happy you’ve been.

The SRB 375M exceeded box claims by a decent margin (135fps and 7 rounds per second, for reference). In my testing, I ended up averaging 144fps and 8 rounds per second, using the included ammo (after hydrating for four hours, of course). There was a decent amount of variability, however, with shots ranging from 118fps to 156fps. Even so, for a blaster designed for simply spraying ammo, it’s acceptable.

There was accuracy in the form of “a cloud going this direction” as opposed to being on target. Some misfeeds did happen, either when the hopper is overfilled, or the ammo level has dropped and the blaster is being held at an angle. That makes it harder for the gel balls to roll into place for feeding, it seems.

Within the SRB 375, we have a miniature version of other airsoft/gel blaster gearboxes. Everything, from the piston to the gears to the motor itself, is much smaller than the corresponding parts in the flagship blasters of the brand. There’s also no cycle control present, so if you release the trigger partway through a firing cycle, the spring will stay compressed inside, waiting for someone to press the trigger and rotate the sector gear that last, little bit. It does make me wonder about the longevity of this blaster compared to others on the market. We’ll have to fire it a lot more and see if those fears are substantiated or not.

Note the rather shallow angles of the bottom of the hopper. Depending on how much ammo remains, misfeeds can become possible when pointing the blaster slightly up or down. Keep that in mind if you’ve expelled plenty of pellets already.

The Splatrball SRB 375M is a fun, full-auto option for the collection, especially for the $45 promo price (MSRP is $50). If using a gel blaster in a war, I’d feel better with a slightly more expensive and robust model. Even so, it’s fun for what it is and extremely easy to operate. Especially for the latter reason, it’s a good blaster to hand off to a new player dipping their toes in the water.