Talk about a colorful entry! Dart Zone Blasters (and parent company Prime Time Toys) may rule the Walmart shelves when it comes to dart blasters, but gel balls are another game entirely. Even so, with players like Splatrball and Gel Blaster already on the market, PTT makes a strong showing with the Pulsar Pro.

High fps? Check. High rate of fire? Check? Awesome paint scheme? Also check! The Pulsar Pro is as strong an entry as they come for the US market, and it’s one I hope to use even more in gel ball wars over the summer. 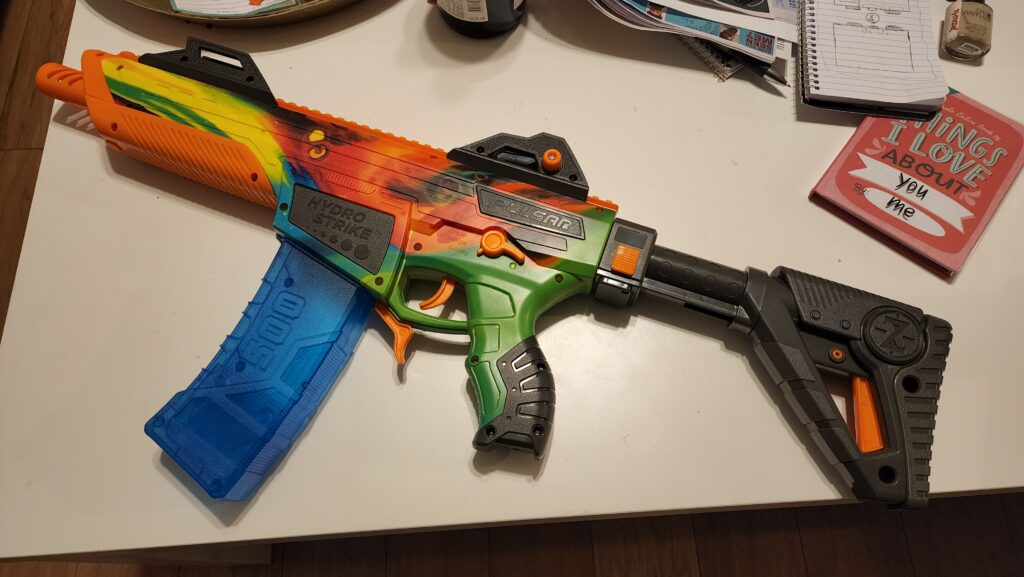 Let’s get the obvious part out of the way: the Pulsar Pro looks FAR different from other blasters. It keeps a standard layout for the blaster (magazine placement, select-fire switch, etc.), but the paint scheme goes as far away from life-like as possible. As someone from a foam-flinging background, I heavily appreciate this! Admittedly, there are a few errors in the painting process – you can see some nooks where the paint spray didn’t reach, leaving small “bubbles” of the default yellow. Luckily, those areas are mostly on the grip, so they get covered by your hand. It’s a very small gripe for what is otherwise a stellar job. Hopefully, blaster makers across the board start making more blasters with more creative paint schemes.

The Pulsar Pro, notably, borrows something from PTT’s blaster roots. That is, in fact, an N-strike stock attachment point! Granted, there aren’t many compatible stocks out there that would look good on the Pulsar Pro. But an adjustable stock that goes with (nearly) all the mainstream blasters out there is a neat thing to have.

The blaster handles quite well, with a comfortable grip and easy-to-reach controls. It’s simple to move your thumb to engage the safety/semi/full auto switch, and the magazine release is easy to move, as well. The latter is a style I’ve seen in aftermarket mod parts for various blasters (including Dart Zone’s various Pro blasters), so seeing it as the default here is nice. 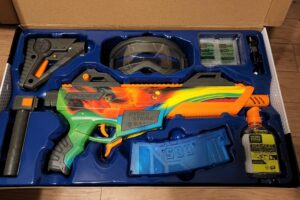 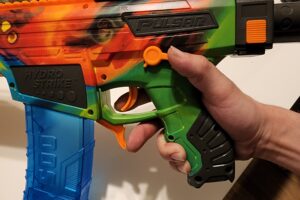 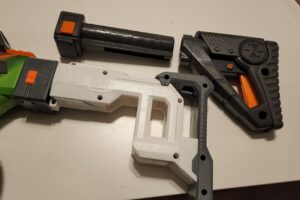 The Pulsar Pro comes with both a 2s Li-ion battery pack and a USB-powered charger. Interestingly, the battery pack features an XT30 connector, so those who already have standalone lipo battery chargers could simply use those instead, given the correct settings. The battery sits under the front grip, which is easy to remove (press a button, then slide off).

Note that extra batteries, ammo, and magazines can all be found online.

As with all gel ball blasters, doing battle with the Pulsar Pro means planning ahead. 5000 rounds are included (the magazine holds 500 easily), and you need to let the ammo soak for 4 hours prior to use. Once that is done, you have plenty of 7.5mm diameter rounds to load into the magazine via the sliding door. 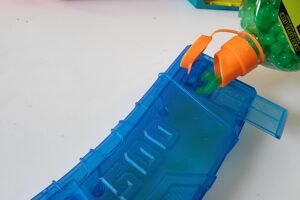 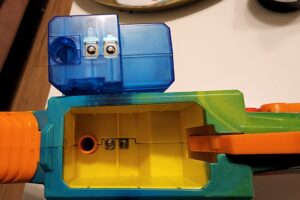 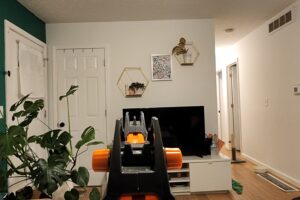 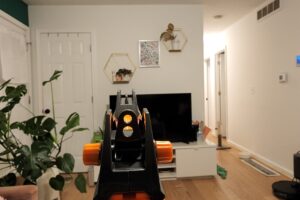 As with other mag-fed gel blasters, the magazine has its own motor and electrical contacts. When loaded into the blaster, the motor spins a feed wheel, pushing balls up a tube toward the breech. The first few seconds of firing will NOT actually fire anything. Once that tube is filled, however, you’re set to go.

The included sights sit atop a long Picatinny rail. You can use them as-is, or you can flip up the rear sights to angle your shots a little. Granted, if you’re firing full-auto, you’re just spraying a cloud of gel balls. Even so, a little aiming never hurt anyone.

Finally, the blaster comes with a large set of goggles. Yes, gel balls flying at high speed can cause eye damage. So playing with these means you should have eye protection on. As should anyone else participating (and yes, being the target is “participating”).

One notable issue with Gel Blasters is ammo variability; not all ammo come out to the right diameter, even after soaking for the right amount of time. So far, at least for the “Gel-Tek” ammo included with the Pulsar Pro, I haven’t seen any issues whatsoever with fresh ammo. Out of the thousands of rounds fired so far, only two or three have broken apart when fired. All signs point to the ammo being well made, and good to go if kept moist.

Accuracy, while acceptable, wasn’t the absolute best. Launching a cloud at a distant target will more than likely hit it with one or a few balls. Even so, it wasn’t as good as the Nebula Pro sidearm, which I could use to consistently hit the small door at the top of my storage shed from ~75′ away.

Still, when the name of the game is spray and pray, the Pulsar can do the job. Just expect better results from a quick burst in full-auto than from a single trigger pull in semi-auto. 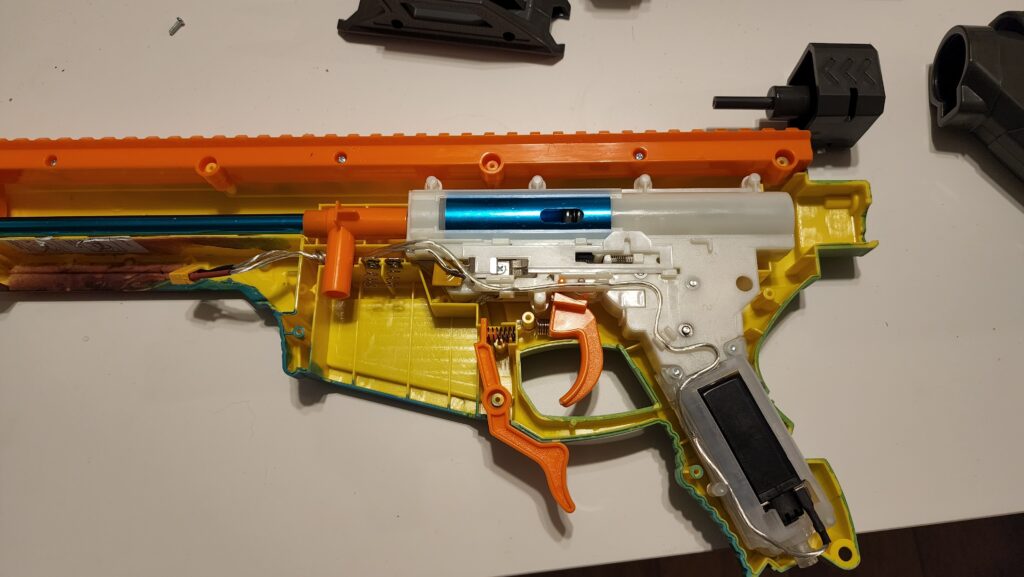 I didn’t bother with trying to open up the entire blaster – just the two halves of the shell. It’s essentially a standard airsoft/gel blaster gearbox, so I didn’t see a reason to open it farther. The gears inside are plastic, so I’m not sure of any real upgrade potential; higher voltage would likely wear the gears faster (if not breaking them), as would the increased force required to compress a stronger spring. That being said, this is an entirely new area for me. I know there are people like Bradley Phillips with lots more gel blaster and airsoft experience…and in those cases, it’s a different market entirely. To paraphrase him, the low-end gel blasters where he plays are 300fps and 20 rounds per second! It’s quite interesting how markets merge and drift apart, in that regard. I doubt I’ll be coming across 300fps gel blasters that I can snipe with any time soon!

For what can be considered a “casual” gel blaster market, the Pulsar Pro is a standout entry. It hits 200fps easily, sprays ammo downfield, and looks good doing it. Walmart (and Prime Time Toys) have had a good thing going with the Adventure Force line, and the Hydro Strike line appears to be more of the same. I don’t get to do gel ball wars nearly as often as Nerf wars, but out of the blasters I’ve been able to test this year, this one is one of the best. Not to mention the best-looking.