Sooner or later, the Adventure Force Destroyer (known all other places as the Xshot Reflex) had to be replaced. This year, it is (presumably) supplanted by the Blitz 6, a new pistol from Buzz Bee Toys. And despite Buzz Bee’s usual penchant for undersized ergonomics, the Blitz 6 ends up being a strong, comfortable blaster for all ages. 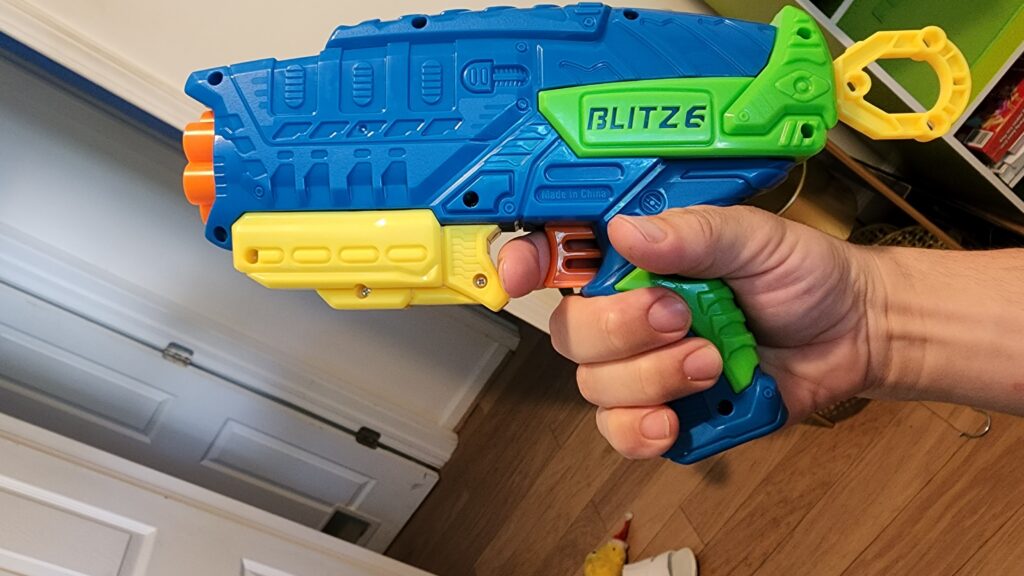 The first thing I noticed about the Blitz 6 was how many shapes and ridges were molded into the shell pieces. True, Buzz Bee has a tendency to use these fun shapes to strengthen the (usually) thinner plastic shells, but this is overkill! In a good way, though – it looks like they went beyond shell strength concerns to having a full, industrial feel to the blaster. Like it would be at home in the hands of a (brightly colored) robot.

Secondly, there’s the grip. Buzz Bee grips are usually undersized. In this case, though, it feels just about right, at least in my hands. The spacing of the grip ridges (and the back of the yellow shell decoration) may be a bit irritating for larger hands after an extended period. For everyone else, though, it’s quite serviceable, and it grew on me after a few days. That yellow section up front can also make for a nice foregrip if you want to steady your shot. 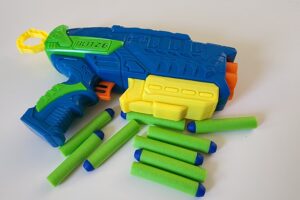 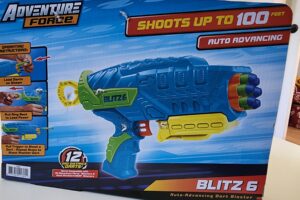 Blaster operation is simple: pull back the plunger rod to prime the blaster. The cylinder rotates on the prime. Then, press the trigger to fire your dart. The Blitz 6 comes with 12 of Buzz Bee’s Long Distance darts, though any standard type will work.

The Blitz 6 did quite well, averaging 77fps with the included Long Distance darts. Accuracy had something to be desired, but most of us use Adventure Force waffles or other, more accurate darts anyway.

As for the rate of fire, two darts per second is the fastest I could comfortably fire with decent accuracy. 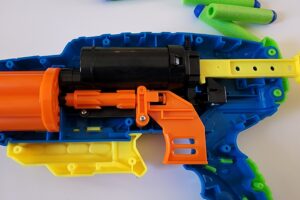 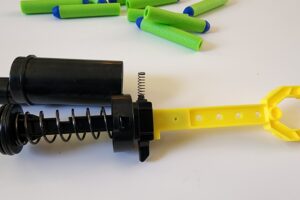 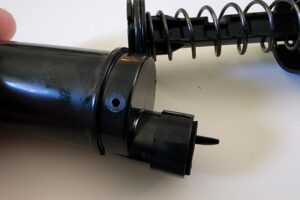 The Blitz 6 is quite easy to open up, and the blaster hides a rather wide plunger tube. The rear cap clips onto the plunger tube, and it houses the catch plate, as well. Interestingly, a metal pin secures the priming loop to the plunger – I have no idea how this would hold up being taken in and out repeatedly for swapping springs. There is a cavity in the middle of the plunger head – filling this probably won’t make a difference unless you’re fully overhauling the blaster, barrels and all.

The cylinder rotation operates via a central gear, with a gear tooth being pulled back by the plunger upon priming. On full pull, a black sloped piece drops out of the way, and that tooth slides back forward.

Note that there is a hole on the side of the plunger tube! It’s hidden from view when first opening the blaster. Once the dart fires and the air restrictor closes, the remaining air squeezes out this hole while cushioning the plunger impact. If you’re not completely overhauling things, there’s a chance your plunger won’t reset all the way (at least quickly – air will leak a little bit somewhere). Which means if you need to fire rapidly, the rotation system won’t fully reset, and you’ll be dry firing the current barrel instead of firing another dart.

For $7.49, the Blitz 6 is easily a great value for any blaster enthusiast. It has a nice pop to it, is easy to use, and it’s comfortable to wield, even after an hour of firing. And there’s some potential for the tinkerers out there, as well. If you need a pistol, grab one!