It’s been a while since Hasbro made a blaster that had multiple functions, decent performance, and a nice price point. For those who tinker, it even offers a ton of modding potential (that part, while nice, is out of the scope of the review score). I speak of the Motoblitz, a bullpup-style blaster featuring a front-mounted, air-powered shotgun. It hits the Elite standard, has a neat secondary function, feels great to use, and it possibly the best Nerf offering this year (barring some unforeseen release).

Two Blasters in One 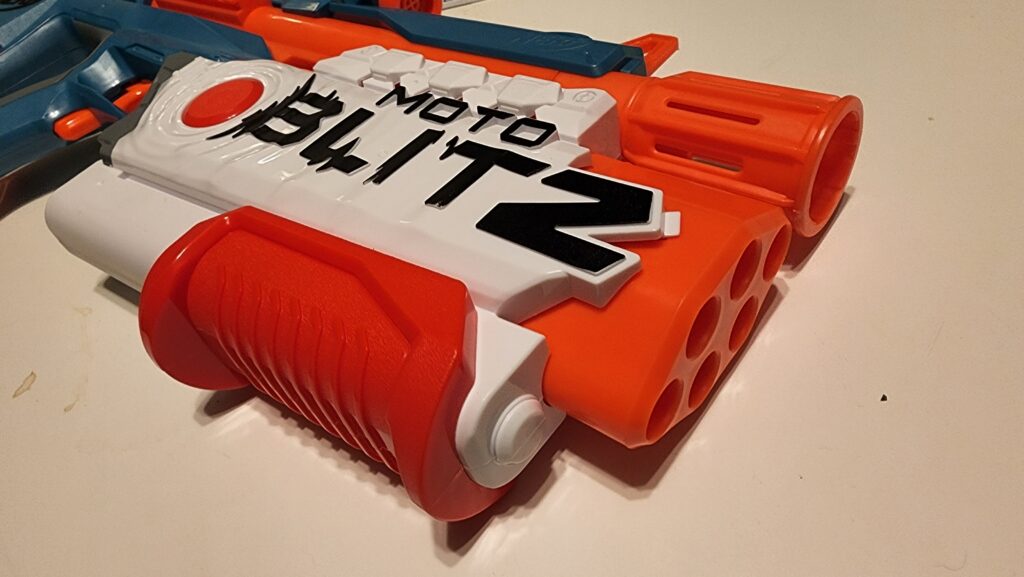 For the longest time, Nerf enthusiasts have wanted to mount a second blaster in front of the main blaster – a Masterkey, if you want to borrow the military parlance for the secondary shot used to breach doorways. This has varied from simple, extra shots (the Crossfire, which attached to Nerf tactical rails) to full-blown secondary blasters sitting up front. In the latter case, popular choices included mounting a Roughcut or other shotgun-like blaster under a Recon barrel, which is attached to a Rayven.

With the Motoblitz, the secondary blaster is already there. A pump grip serves to push air into a reservoir, waiting to fire a volley of darts. Once primed, dual blast buttons (one on each side, to account for righties and lefties) let the user press them to fire six Elite darts at once. Granted, all that air split between six darts does limit performance. Even so, a legitimate shotgun attachment means the user can, at the very least, have a backup shot ready while reloading. It could also mean coming around a corner and hitting multiple people before trying to tag out the remaining opponents. 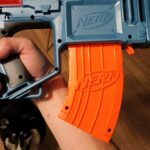 The main blaster, meanwhile, operates much like a Rayven. The dart magazine loads behind the trigger and grip, the rev trigger spools up the flywheels, and the main trigger pushes one dart through the flywheels on each pull. Ergonomically, though, I enjoy this blaster far more than the Rayven. The thumbhole stock is wider than in the Rayven, and the magazine release is much more user-friendly. Against the shoulder, the entire thing feels quite natural.

There *is* a “scope” molded into the blaster. However, unless you’re a small child, it’s useless. That being said, one of the blasters’ tactical rails resides on top of it (the other two are on either side of the barrel). Even if you can’t use the default scope for aiming due to being older (I know, what a horrible thought), it’s quite easy to use the rail itself or an attachment to aim for targets at a distance.

Interestingly, no “off” switch is associated with the jam door. 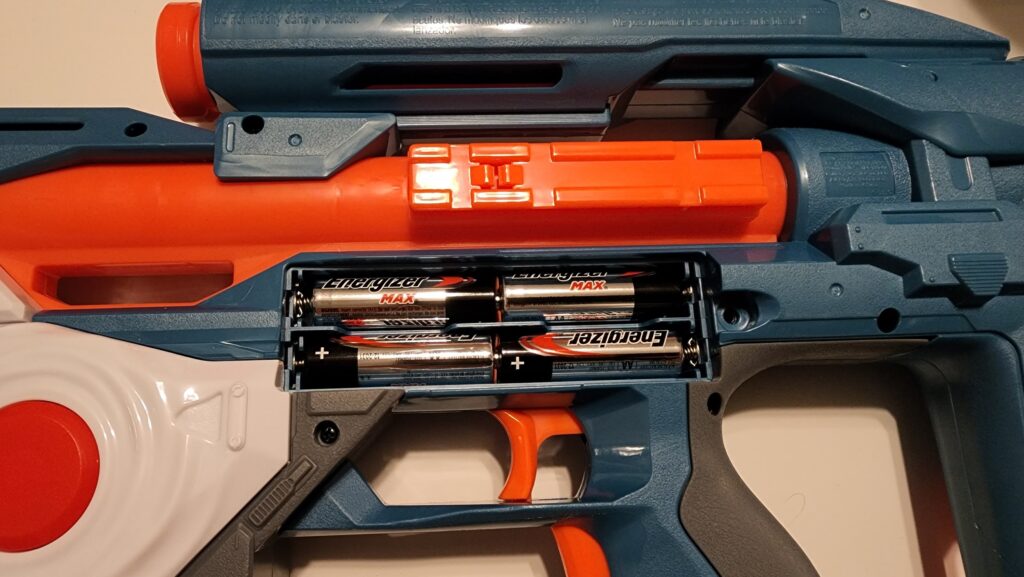 The Motoblitz worked within expectations. The main blaster itself averaged 71fps, which tends to be par for Nerf. Three darts per second were quite feasible with this semi-auto blaster, though the faster you spam darts, the slower they come out of the barrel. The attached shotgun, meanwhile, averaged only 47fps. However, this is done for six darts in total; given the relative inaccuracy of Elite darts compared to others, the wide nature of the fired darts makes up for the lack of velocity. It should also be noted that the average speed listed is for all barrels – you could insert a single dart, or six darts, and the result would be the same.

4 AA’s are required to actually fire the main blaster.

The Motoblitz is quite easy to open. Strangely, despite being an Elite 2.0 blaster, the Motoblitz has no clips or solvent welds to speak of! 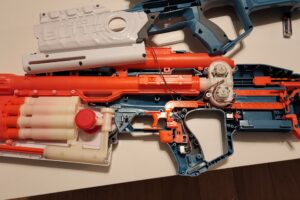 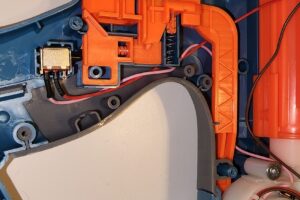 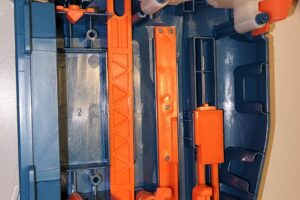 Once inside, there are several things that can be modded immediately. The shotgun system consists of six piston-valve tanks, sharing a common pilot volume. Think back to the N-Strike Hornet, and you’ll recognize what I’m talking about. In this case, however, ease of construction makes life easy for modders. The over-pressure valve has a screw associated with it, setting the max pressure of the tanks. Tightening this screw down (within reason, as using too much force could break things) sets the operating pressure higher. That, combined with filling vent holes in the barrels, results in longer ranges; darts shoot at the same velocity as the main blaster.

As for the main blaster, I already have new flywheel cages online! Some trimming of the shell is required, but my personal Motoblitz can now hit ~170fps on Meishel 2.0 motors, 41mm spacing, and Daybreak wheels. I have yet to design an expanded battery door, however. Hopefully, I will find time between working overtime and picking up the wife from the airport.

Also, it should be possible to model a barrel end of the shotgun to fire either three Mega darts or two Mega XL darts. When that happens, though, is another matter.

Hopefully, I can get to some of these latter ideas. Given the interest in this blaster, though, someone may beat me to it.

The Motoblitz is the Nerf blaster many of us have been missing. It’s easy to operate, comfortable, and has acceptable performance, but can be made to deliver so much more. More importantly, the secondary function both works and is fun to operate. At $42 (assuming it stays at that price), the Motoblitz is a steal, and I can’t wait to see what people do with it.