Xshot went a somewhat different route this year with their blasters. Four blasters will be featured in the Skins line, with various paint schemes ranging from graffiti to Sonic the Hedgehog! The possibilities for promotion with this line are endless, but it helps if the base blaster works as intended.

Two of the Dread blasters were sitting on a Target shelf this past weekend, for some reason, and I had to pick them up. Between the new darts, new paint jobs, and slightly new blasters, they needed a look. And so far, they look fantastic. 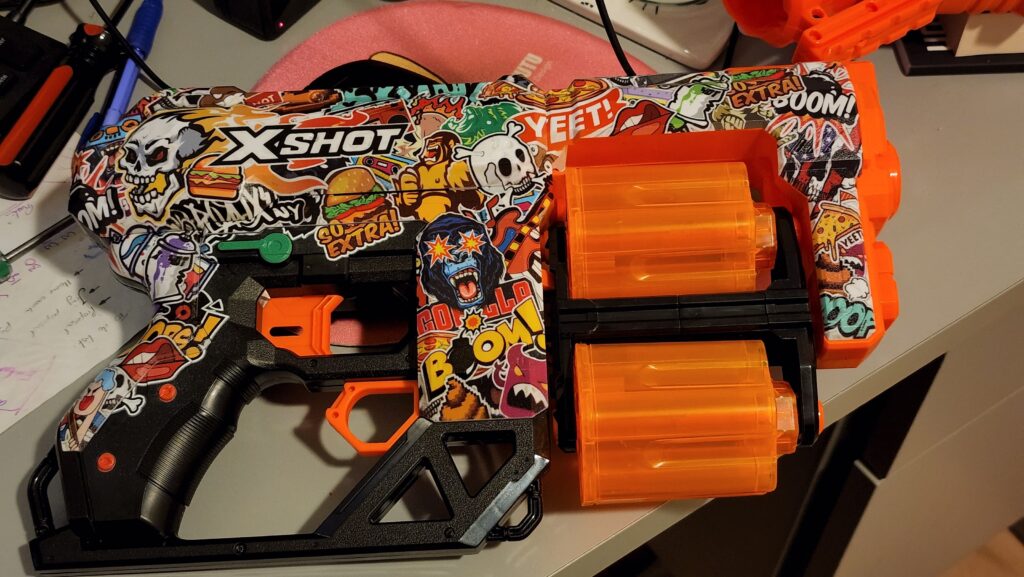 For those unaware, the original blaster, the Xcess, has been a staple of the Xshot line for nearly a decade now. After a few years as a simple two-cylinder blaster you rotated by hand, a complete redesign made it into a pistol far superior to what Nerf was offering. It was handicapped by the inaccurate ammo, of course, but it could at least use all of the full-length darts that were out there.

Functionally, the Dread is no different. In fact, for the most part, it ISN’T different. However, a few parts of the design had to be changed in order to make the “skins” possible. I am personally unfamiliar with how things get printed onto plastic objects, but I do understand that you can only have so much flexibility when it comes to printing on multifaceted objects. The Xcess priming grip halves, for example, simply have too many angles to hit with one pass. 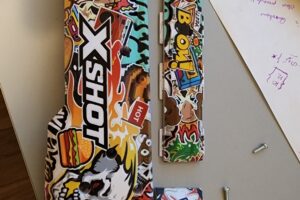 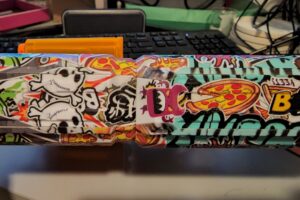 To make manufacturing easier, the top surfaces (faux rails, etc.) are independent pieces, sandwiched between the sides. With a few extra shell pieces, everything can be printed on more easily, making the mass production of “skins” possible. And since it IS a different shell, I guess it also qualifies as its own blaster!

The artwork on the blasters is top-notch, without any visible print lines or defects (outside of the screw holes, which we won’t count because who’s going to put ink down a screw hole…).

Changing of the Dart

The paint isn’t the only thing that’s new. These blasters come with new “waffle” style darts, as opposed to the old Xshot design. I still need to set up a scientifically valid test for dart comparison. Nevertheless, the new darts are slightly longer, as well as a little heavier (1g as opposed to 0.95g, if my scale is working correctly). Anecdotally, this makes for a more accurate dart, and the middling length (between regular Xshot and Nerf darts) makes them more compatible with other brands. That does produce an interesting possibility: Xshot always makes giant boxes of bulk darts for cheap. If they sold these for less than Dart Zone’s offerings, would they be good enough to justify buying at the lower price point? 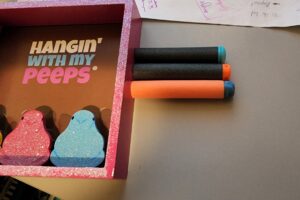 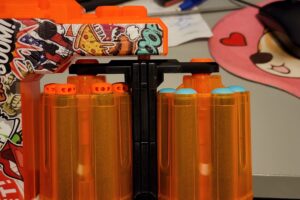 In any case, I’ll have to find a free afternoon, bolt down a few blasters, and compare dart spread on target. Science: it can be tedious, but the end results are often quite interesting! 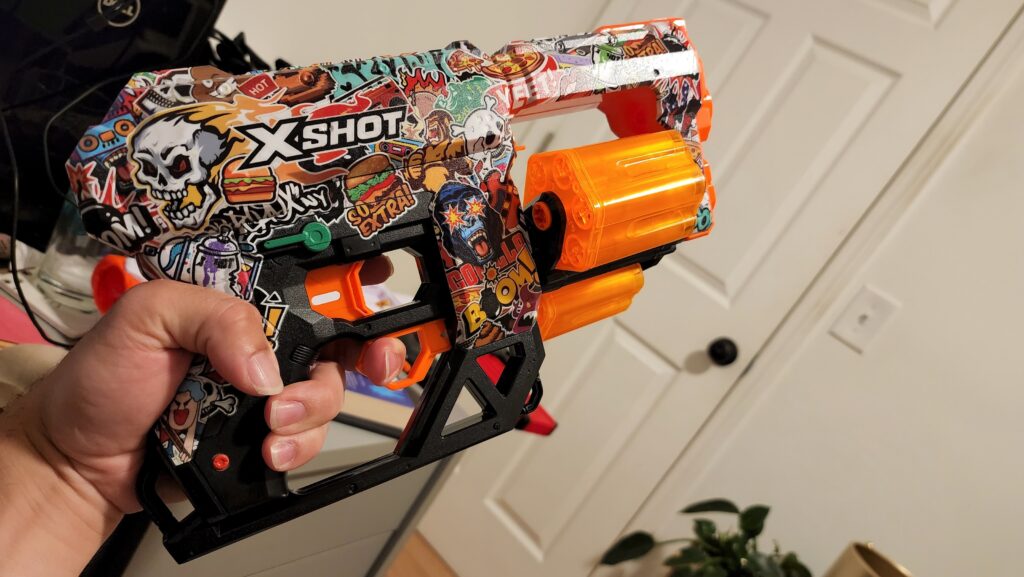 The Dread functions exactly like the Xcess. Pull back the top priming handle to compress the spring and rotate the cylinder, let it return (either by spring or by hand if you’re in a hurry), then pull the trigger to fire. After six shots, you can pull the cylinder release to swap the cylinders (it only rotates partway, so you’ll have to complete the rotation by hand). While you’re firing from the second cylinder, you can freely reload the first.

There is no slamfire in this blaster. So while three darts per second is possible, two is more realistic, especially if you’re trying to actually hit the target.

Dart velocity tests produced some fun results. With the included waffles, I shot a very consistent 82fps average, with only a two fps deviation in either direction. Using classic Xshot darts, I averaged 85fps, but there was also a much wider spread. As the waffles appear to be more accurate, they seem to be the logical choice. 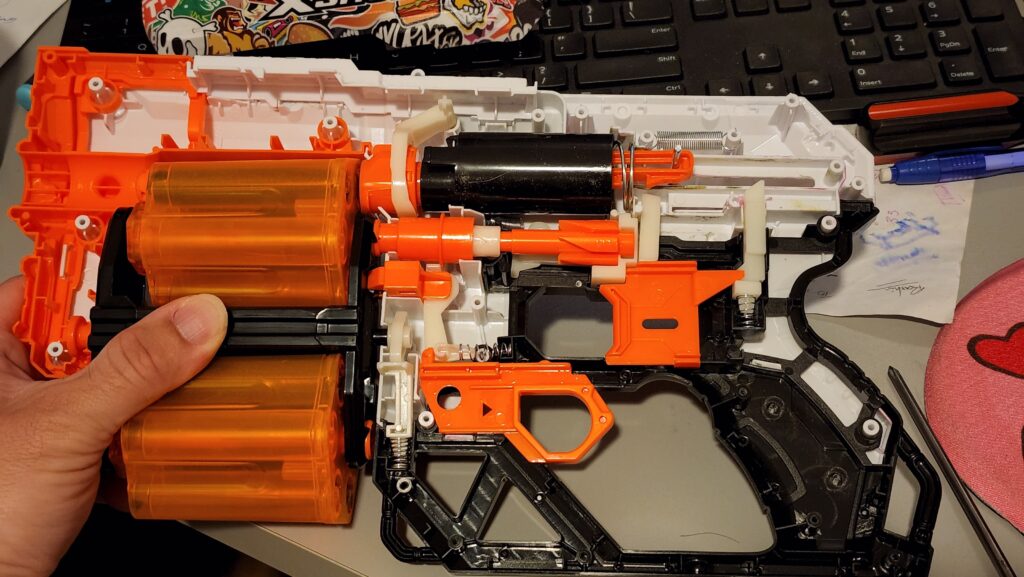 They’re as you’d expect, considering this works the same as the Xcess. Enough said,

I tried the blasters out at a local Dart Arena on a free afternoon. Granted, there are only so many conclusions you can draw, due to the darts on hand, Darts in an arena can vary from lightly used to well trampled, so some shots will barely come out of the blaster. That’s just the nature of the beast, especially when the arena has to keep dart blasters around for the kids who can’t properly use Rival.

Even so, from the (unrecorded) 1v1 matches versus a Rival Takedown to the games with a local family, the Dread performed well. The two different ones I had on hand also got plenty of attention from the kids playing there, so it’s safe to say that Xshot’s strategy will work to sell blasters.

The Dread itself doesn’t do anything new. However, with those few small changes to blaster construction, Xshot can now print whatever they want on the blaster. Seriously, with the largely automated manufacturing system they’re using, I’d be shocked if custom blasters didn’t appear on the horizon. A random person ordering something, no, but a sports team wanting souvenirs or giveaways? That’s just waiting to happen. Special events? Might be a little costly, but 1000 blasters could be doable, especially since the paint part would come last. Commemorative items? It would be cool to see custom blasters passed out to spectators at the 2024 Summer Olympic events around target shooting, or for some other special anniversary. Xshot really has a moneymaker on their hands with skins blasters (and the existing skins being offered are quite nice – you’ll find something you like!).

They’re the same, inexpensive, high-powered blasters as before. They just look cooler now!