The Ultra line has come a long way after all its initial faults. It’s like modern-day video game releases; there were plenty of bugs and issues at the beginning, and things took a long time to get patched. For those using Pro blasters or standard darts (and let’s be honest, why would you use any full-lengths besides waffle tips and their relatives?), blasters like the Ultra Strike ultimately won’t matter. Judged by its own merits, though, the Ultra Strike is one of, if not the best, Ultra blasters out there. If only cheap, accurate ammo was more accessible. 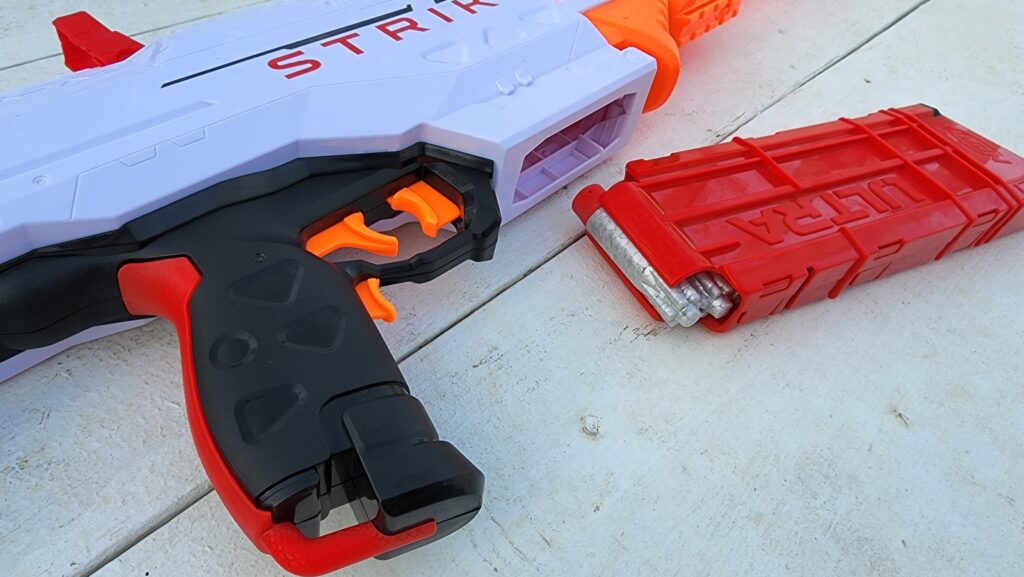 Hasbro gave Ultra the semi-auto, mag-fed flywheel blaster it needed with the Amp. After that came the Focus, the Accustrike (and Amazon) variant with a magazine storage stock of considerable length. For other retailers, though, those features had to wait for the Ultra Strike.

The Ultra Strike comes with those features and more. The stock is at a comfortable length, and it sits against the shoulder well. An extra magazine, should you have one, presses into the storage slot and doesn’t come loose, even after a full afternoon of running around and shaking. Most importantly, though, is the main grip of the blaster. For once, Hasbro elected to ditch the cramped grips of the rest of Ultra! Honestly, it shouldn’t have taken this long to make such a thing happen.

The rev trigger is adequate, if small, and the main trigger pull is very smooth. The magazine release sits in the same area, though, so those with large fingers may find the trigger area quite cramped. 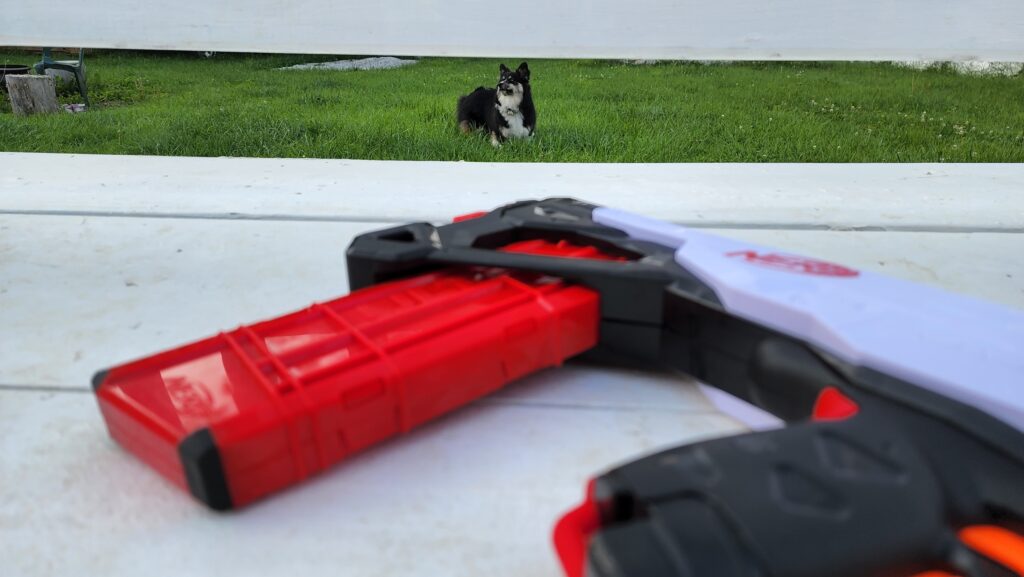 Ultra and Strike are in red on one side of the blaster, with a lack of paint on the other. Three tactical rails are present – one in front of the angled foregrip, and two on top. There’s also a flip-up sight, though I found it to be not that useful.

Finally, to get the full length of the blaster (as well as make it operational), there’s a large barrel to insert (it locks in place so as for casual users to not remove it). The barrel itself adds nothing to performance, but there’s a safety switch it depresses. Those of us who don’t care about the barrel can simply open the blaster real quick, take out the switch, and solder the two remaining leads together. Assuming you’re so inclined, of course. 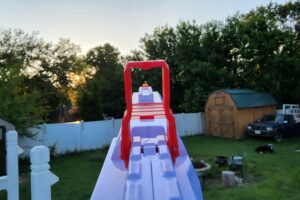 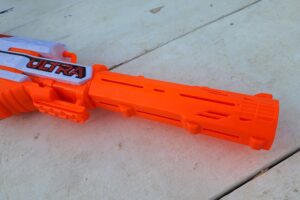 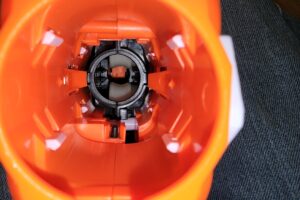 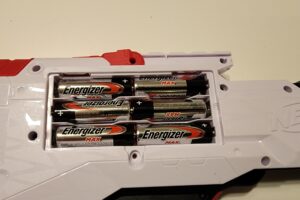 The Ultra Strike, on 6 AA batteries, averaged 105 fps with the included darts as well as a mix of regular Ultra darts. Three darts per second is quite feasible to do, though the nature of alkaline batteries means ranges will diminish due to the lack of spin-up time. In any case, that’s still pretty good for a stock blaster.

Between a few rounds at CANE and some lighthearted outside foam flinging, the Ultra Strike ended up being quite useful. The included darts generally went straight, and regular Ultra darts, while nothing special, were still clocking in above 100fps. So they went on target relatively quickly. At the very least, it was fun to use, and a lot more so than other unmodified Ultra blasters out there.

The Ultra Strike is simple when it comes to rewiring – it’s the same setup as a Stryfe. Power goes between the battery box, rev trigger, and motors (which are tied together with a board). The flywheel cage has the same mounting scheme as the Ultra Select. So for now, no Ultra short dart conversions. Though I’m sure people are out there working on that right now. 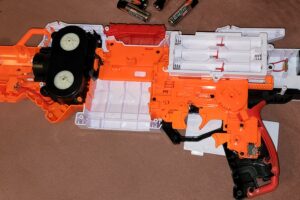 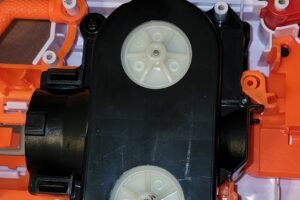 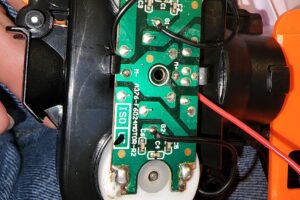 I ended up rewiring the blaster, and I hooked up the stock rev trigger switch to a MOSFET to turn the power on and off. I also eliminated the barrel safety switch. I still need to make an extended battery door, but hitting around 130fps on a 3s lipo is nothing to sneeze at. Ultra may not be as competitive as other blasters at the events I go to, but this one can hold its own.

Ultra had a rocky start, but the Ultra Strike shows what the line can do. A somewhat large, powerful, and comfortable blaster with plenty of capacity and a good rate of fire. If only Hasbro made Accustrike Ultra darts more readily available and cheaper…