It’s not an exaggeration to call the Alpha Auto 72 the best Buzz Bee blaster in years. $30 gets you massive capacity, full auto blasting, and a blaster made to be usable for all ages. Combine that with a few nice touches here and there, and you have a blaster that needs to be part of your collection.

NOTE: I initially bought this blaster when it first hit shelves, and later got a free one for review. Thanks, Buzz Bee! 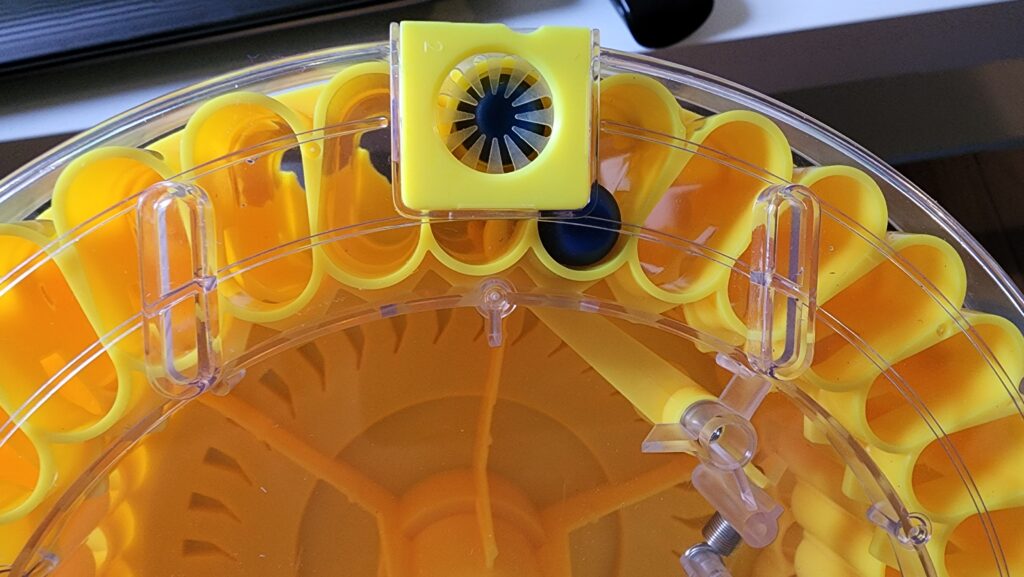 Last year saw the introduction of the Dart Zone Tomahawk 60 (also at the same price point), which had a similar setup. It would seem Walmart wanted their own version, and Buzz Bee took inspiration where needed while adding their own flair.

The Alpha Auto 72 features its own, large drum, which can be swapped with the removal of a plastic pin from the blaster. The drum has 36 slots, each holding two darts. Unlike the Tomahawk, however, there’s a spring-loaded lever within the drum assembly, pushing darts outward. One other advantage here? Since the front of the drum is contained within its own casing, resting your arm against the front during use won’t hinder rotation.

The drum is only built to rotate in one direction – and it does so quite freely. Turning the blaster along the lengthwise axis is enough to make the drum spin! I haven’t had any trouble with this during battle, but it IS something to be aware of. It’s possible that quick movements could result in skipping darts and the user “running out” before they’re actually out of ammo.

Even so, the drum is quite easy to reload on the fly, should you only have one drum on hand. So filling in gaps in the circumference isn’t an issue, especially if you have some cover. 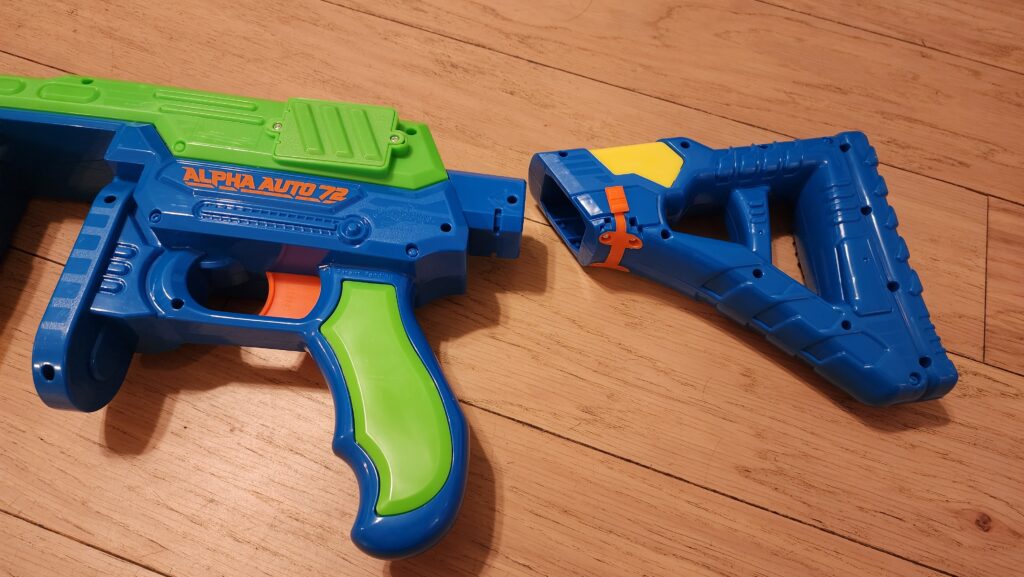 The blaster itself is scaled to match the drum. In the case of Buzz Bee Toys, which usually makes the gripping surfaces far too small, that’s a blessing. The main grip is huge compared to other  Buzz Bee offerings, yet comfortable for lots of hand sizes to use. The front grip is similarly large, although it’s quite far forward. If your arms aren’t long enough to both use the front grip and shoulder the blaster, the stock can be removed. You know, for the whole hip-firing gangster effect.

Oh, and did I mention that’s an N-strike stock attachment point? Compatibility of any kind is a welcome addition!

A flip-up sight is included with the blaster, and mounts to the top rail.

Using the blaster is similar to past Buzz Bee offerings in that the trigger is dual-stage. Pulling partway spins up the flywheel motors, while a full pull turns on the pusher mechanism. It’s a flavor of operation not all people like, but it works.

Overall, the blaster feels great to use, and the plastic feels just right, Buzz Bee got their flagship right, it seems!

The Alpha Auto 72 is quite strong in this area, averaging 92fps on full auto and fresh batteries in my testing. The rate of fire is middling for a full-auto blaster, and it hovers around 2.5 darts per second. That being said, the slower rate of fire gives the flywheel motors enough time to spin back up to maintain dart velocities.

Darts were skipped on occasion during testing; depending on when you let up on the trigger, the pusher/rotation mechanism can reach a state where the drum has moved, but the pusher didn’t activate. Thus, the next time you fire, one barrel has been skipped. Generally speaking, however, the feeding has been quite reliable.

Using the blaster in battle is fun…provided you don’t accidentally mess up a safety switch when opening up the blaster to document things! That issue aside, the Alpha Auto 72 was both hard hitting for a stock blaster, and fun to use. 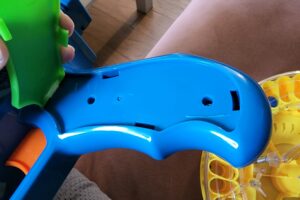 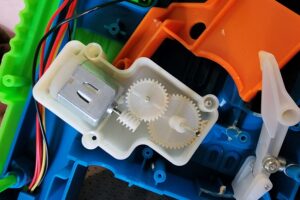 The Alpha Auto 72 has many screws, and two of them are hiding under the side plate on the main grip. Once removed, though, the system is easy to map out for any future shenanigans. The pusher/rotation mech is derived from previous iterations (Tommy 20, Brute, etc.), but adapted for turning a huge drum. In fact, there’s a clutch mechanism that’s engaged by the movement of the trigger itself. When the trigger moves, pieces mesh and the system operates.

I have a test cage designed…but I’ve been sitting on it. Life suddenly got really busy, and I’ve had barely enough time for reviews as is!

The Adventure Force Alpha Auto 72 offers a lot of bang for the buck, with massive capacity, great ranges, and a decent rate of fire. Not to mention the satisfying feeling of a blaster recoiling from the drum movement as you mow down the competition.