Note: I was sent a free sample (complete with influencer packaging) from Hasbro. Thanks, guys!

After a somewhat surprising announcement a few months ago, the Nerf Pro Gelfire line has finally arrived. Legal drama notwithstanding, having a big name like Nerf on the scene raises awareness of gel ball blasting to a whole new level. The Mythic is compact, feels great, and is easy to use. Unfortunately, though, despite the marketing. it’s really not that innovative, and it’s actually weaker than many other things on the market. It’s still fun to use, and the target audience will enjoy it. But in terms of bang for the buck, there’s certainly better. 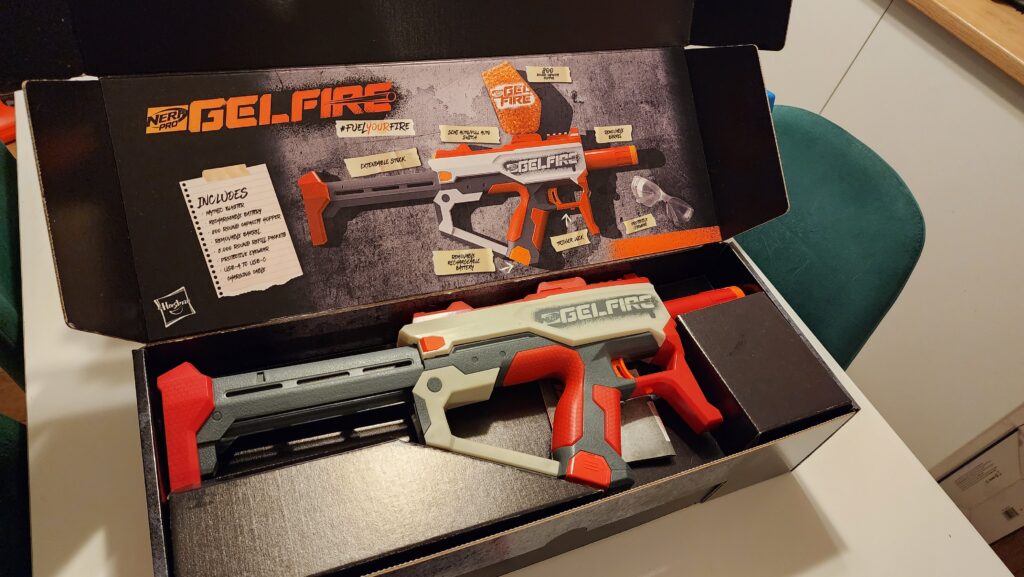 The Mythic, with or without the influencer packaging, is quite pleasing to the eye. The red, grey, and orange body (not to mention orange ammo) clearly screams toy, but it also has that serious look you’d expect from Rival or other Nerf lines. Interestingly, it has a few Rival-type tactical rails (Hyper also uses this system), though as of yet nothing utilizes them. Ideally, you could carry spare hoppers…but not yet.

The grip is large, and it holds the rechargeable lithium polymer battery at its base. The battery here (7.4V, 500mAh) is removable and charged via a USB-C port. It’s a small battery, yes, but you’re only driving one motor and the associated electronics. Power consumption isn’t nearly as demanding as it would be for, say, a Prometheus. 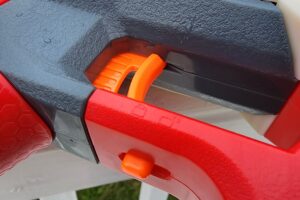 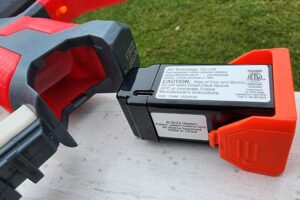 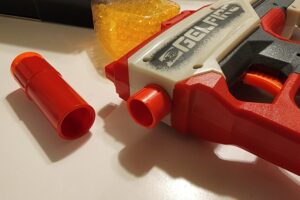 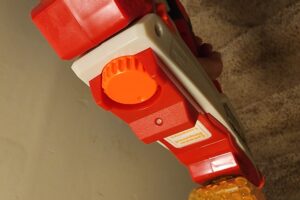 The trigger action is smooth, with an audible click of the trigger switch at the end of the movement. A safety sits below that, physically preventing the trigger from moving when engaged. The front of the blaster sports a removable barrel extension (purely for looks). And a flat surface in front of the trigger serves as a front hand hold, should you want to aim with both hands.

The back of the blaster has two prominent features. First, an extendable stock can be brought all the way out or pushed all the way in (there are no middle settings). It’s very comfortable and actually feels more solid than some regular dart blaster stocks. Second, there’s a large wheel for selecting between off, single fire, and full auto. The LED above the wheel flashes green when the blaster is on single and is solid when in full-auto. 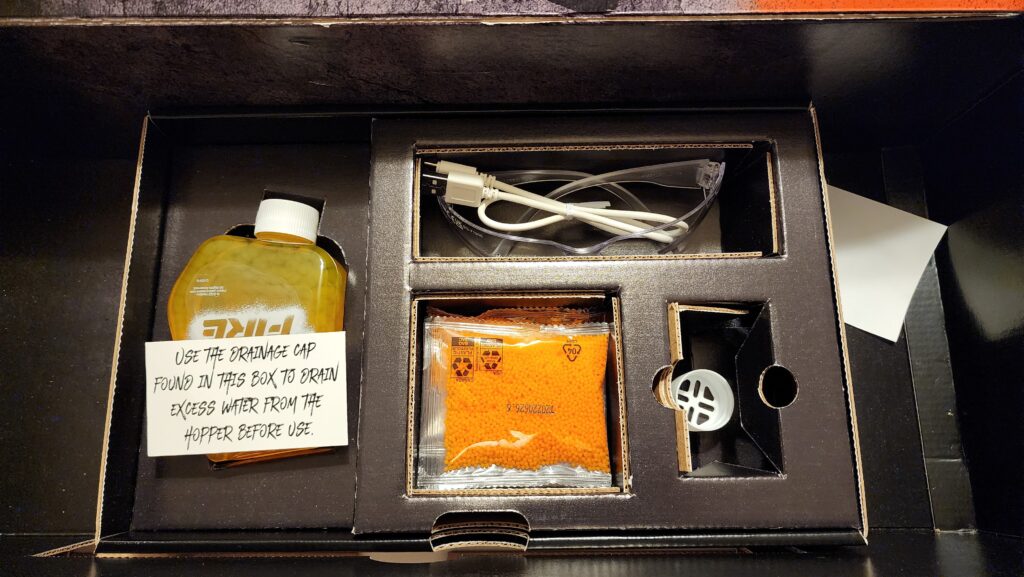 Of course, you have to have gel balls to go with the blaster. In my case, there was already a hopper full of ammo ready to go (after draining the excess water, of course). For everyone else, it’s a matter of soaking the dehydrated pellets for four hours. That gives enough time for the super-absorbant polymer to suck up and retain water to reach its final shape. Technically, you can’t oversoak the ammo, thus why they were comfortable sending it like this in the influencer box.

Once the ammo is hydrated, the hopper can be inserted into its port and twisted to loosely lock in place. Remember to hold the blaster upside down while doing this – doing it the other way means pouring out ammo before you get the hopper in place!

Along with the ammo, the box has safety glasses, a charging cable, caps for draining excess water from the hopper, and instructions.

The hopper does get in the way of aiming down the blaster, though…

On a fully charged battery, the Mythic was indeed hitting the ten rounds per second rate of fire that Hasbro claims. That being said, hopper systems on gel blasters aren’t always the most reliable, simply due to trying to funnel all of that ammo down into a single file line. Sometimes that can be due to overstuffing or the angle the blaster is held at, as we saw with the SplatRBall 375M. Other hopper-fed blasters (Gel Blaster Surge, etc.) can also see issues; however, light movement was usually enough to loosen things up.

For the Mythic, though, you could visibly see the ammo bind up at the bottom of the hopper bottle, needing a much more violent shake to fix. Maybe it’s the flat bottom causing issues? I’ll admit I’m not the most experienced gel ball person in the room, so others are free to chime in and correct me. In any case, needing to shake the hopper isn’t catastrophic in any sense.

In terms of ball velocity, the Mythic was weaker than expected, only averaging around 132fps (varying from low 110s to high 140s).

On the plus side, while there’s no hop-up for improved accuracy, the ammo generally all went towards the target with only a moderate spread. It’s accurate enough to hit a person’s body in close quarters (up to 50ft) or farther, but not so much that you could reliably hit an exposed arm or leg at a distance. Given the large hopper on top, you can’t really aim well enough to do that, anyway. Spray and pray is the game here!

The inside of the Mythic is largely what you’d expect from gel ball blasters of this size. The Gel Blaster Surge, SplatRBall 375M, and various other gel ball pistols use the same style gearbox (though the orientation of the motor and gears may differ). So it’s nothing new, but it does open up the possibility of someone installing metal gears and attempting to do silly things with it. 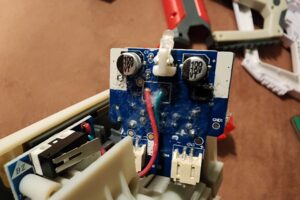 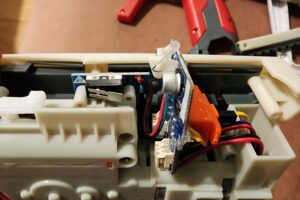 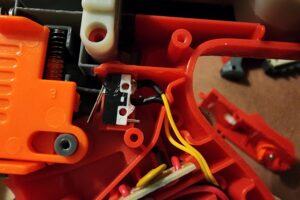 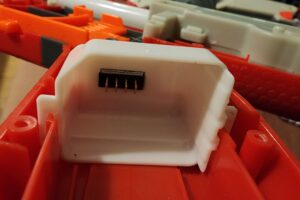 One screw holds the gearbox down in the shell, and you’ll have to remove it before a full disassembly is possible. Inside the blaster, you see all the things you’d expect: a main board with a three-position switch, plugs for the battery wires and the motor, etc. There is a cycle position switch, for stopping the system in the rest position after you let go of the trigger.

I doubt the electronics would be friendly to trying to shove more power through them. Even so, seeing someone attempt to upgrade the blaster would be amusing.

Given the generally casual nature of gel ball play here in the United States, simple hopper-fed designs will have a place in the market. That being said, the Mythic feels both late to the game and overpriced for its functionality. There’s nothing inherently wrong with the blaster, though. It’s still fun to use (especially against targets that can fire back), but had I actually spent money on this blaster, I’d feel more let down.

$50-$60 seems more appropriate. Wait for a sale if you don’t absolutely have to have it immediately.