Earlier this week, I saw a news article in Bloomberg Law, detailing a vote by the US International Trade Commission to investigate several manufacturers and importers of gel ball blasters. That vote was based on a complaint from Hasbro and Spin Master, and was made against brands ranging from SplatrBall to Hydro Strike (Dart Zone) to Gel Blaster. That complaint asserted that the others were importing products violating patents Hasbro had licensed from Spin Master.

Of course, you may remember that Hasbro recently announced their Nerf Pro Gelfire Mythic blaster, with preorders available for its November launch. Naturally, the timing seems more than coincidental, seeing as a successful action would leave a growing gel ball market in Hasbro’s hands. But with a recent filing in the United States District Court, Western District of Texas…things don’t seem to be that simple.

Superabsorbent polymers (SAPs) are long chemical chains that can absorb and retain large amounts of water relative to their size. Research began in earnest during the 1960s, when the USDA became interested in finding materials to improve water conservation in soil. Since then, SAPs have been used in diapers, candles, flood control devices, and (of course) potting soil and related applications, where it can give a controlled release of water and water-based fertilizers. 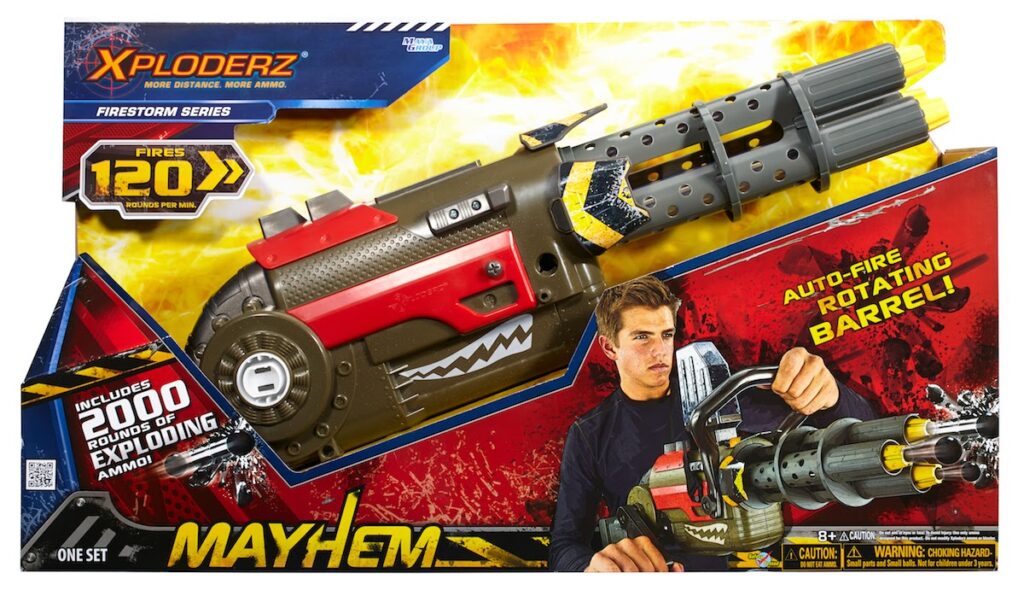 SAPs, depending on the formulation, can hold their shape under some amount of pressure. This makes it possible for the them to be launched from a blaster (propelled by air pressure), and it led to the rise of gel ball as a recreational activity. In the United States, The Maya Group filed patents for and sold gel ball blasters under the Xploderz brand name in the early 2010s. The blasters were all gravity fed from small hoppers, and were, generally speaking, all operated via pullback and release mechanisms (a few exceptions existed). A few years into the line’s existence, before it died out, a few “BlasterPro” items were released, with a higher target age range, 150fps speeds, and triggers. In a sense, the E5000 and the S2500 were forerunners to today’s gel blasters. Even if they were slower and less efficient.

Among the United States blaster community, the line didn’t quite take off…but the blasters lent themselves to modification for firing short darts, and the large plunger tubes and strong springs were easy targets for harvesting when the blasters were found in thrift stores.

While the Xploderz line may have died, the underlying patents and branding for Xploderz, Orbeez, etc. were acquired by Spin Master in later years.

Xploderz may not have taken off, but gel ball as a sport took off in other areas, like China, SE Asia, and Australia. The past decade saw not only hopper-fed designs, but conversions to more airsoft-style firing and feeding mechanisms, including motorized magazines. Recent crackdowns on blasters in China and Australia notwithstanding, most of that time period saw gel ball become an airsoft alternative, since the latter was often banned.

In the US, gel ball saw a massive return in 2020. Brands like Gel Blaster made their start on Kickstarter, and after successful campaigns expanded from the internet to hobby stores and (eventually) big box shelves. Other brands (SplatRBall, Unlocx, etc.) would soon follow, and Walmart themselves would get their own in-house brand in collaboration with Prime Time Toys.

A few of our previous reviews, if you want more info (I’m behind on reviewing these):

Back in July, as per the USITC press release, Hasbro, alongside Spin Master (who they licensed the patents from), filed complaints that several companies were importing products in violation of those patents. As per the USITC website, this leads to a section 337 investigation into unfair imports, with possible remedies including cease and desist orders to the violators, as well as ordering Customs to stop products from entering the United States. Earlier in August, the commission voted to start an investigation into the matter. For obvious reasons, this would benefit Hasbro, seeing as it would eliminate much of the competition in that market. Yes, the Nerf Pro Gelfire Mythic is entering the market later than everyone else, but when it comes to violating patents, that would seem to be the correct position. Right?

A screenshot from the Gel Blaster filing, showing Hasbro representatives at a business function.

Once Hasbro and Spin Master filed those complaints with the USITC, Gel Blaster sued Hasbro in federal court! According to their filing, Hasbro and Gel Blaster not only entered into talks about licensing the Nerf brand, but entered into both a Confidentiality Agreement (meaning information shared would only be for evaluating a possible business transaction), but also a Common Interest Agreement (with several things on the table, ranging from purchasing a significant stake in Gel Blaster LLC to a viable defense strategy against the Spin Master patents, should a lawsuit occur). Reading the entire document, it would appear that (at least from Gel Blaster’s point of view) Hasbro entered into these agreements, acquired critical info from Gel Blaster, and then proceeded to license the Spin Master patents for their own product while attempting to destroy the competition. All without actually exiting said agreements. To add insult to injury, Gel Blaster accuses Hasbro of falsely telling prospective retailers that Gel Blaster was violating IP to which they had rights; the obvious motive, of course, would be pitching the Nerf Pro Gelfire line instead.

There is much more to the situation than meets the eye, and we have yet to hear the Hasbro side of the story in court. Even so, a precursory reading of the filing with the Western District of Texas has six counts for which Gel Blaster can sue Hasbro. How this resolves is anyone’s guess, with one opting for Executive Branch relief and the other going to the Judicial Branch in response. Personally, reading the patents gives me the impression that they’re invalid. Mainly, it claims all possible methods of propulsion, all possible shapes of the ammo, and defines magazines as essentially all possible carrying methods for ammo. With claims so broad, I don’t think they’d hold up in court, and I’m sure Gel Blaster thinks the same. Especially considering what The Maya Group actually made when they first got those patents; you shouldn’t be able to claim things you haven’t actually made.

In any case, the saga will continue for the foreseeable future. Hasbro is more than welcome to prove my impressions of the situation wrong. And at the end of the day, I hope that whichever party is in the right is able to win on the merits of the case.