My, how time flies! A little over three years ago, we saw the first Nerf Scooter. It was…okay for small kids, but nothing to write home about. Even if it was a fun modding platform. Now, out of nowhere, we have the Nerf Scooter 2.0, and it’s better in virtually every way.

Holds moderate weights? Check. Uses a reliable blaster? Check. Can be aimed wherever you want to point it? Check. It’s clearly a good revision, and given both my war use and the interest of younger kids, it will be a hit.

Note that I’m not using the usual review format for this thing. Let’s go for a “journey of discovery” instead!

Sorry Joey, I need someone to stand in for a child XD

My previous experience with scooters left something to be desired. Sure, I had tons of fun with it…but that was only after heavy modification. The base product wasn’t great, either as a scooter or as a blaster. It may have featured a Rhinofire-like mechanism, but it shot darts more like a Recon or Maverick in terms of speed.

As soon as I had Nerf Scooter 2.0 out of the box, I was immediately impressed (and wondered why the original had been so expensive). It was an actual scooter, one with proper steering and good maneuverability. It also was rated for up to 185lbs, which means kids, young teens, and possibly even smaller adults can use it (I may be under the weight limit, but in practical terms, I’m too tall).

The scooter needs assembly, but it comes with the necessary tools for putting it together and tightening all the necessary bolts. A six dart magazine is also included, along with 6 darts.

I used the scooter one round at a CANE event, though the admins did request that I wait until a dart sweep happened. Less potential ammo to be damaged in the name of testing, after all. Even with one round, it was apparent how much better this was than the first version.

The blaster itself started off with ~70fps shots, and in full auto would settle to around 62fps. Interestingly, a single button press (there is only one button) would make the blaster fully spin up, fire a dart, then wind down. Holding it, meanwhile, would lead to a three dart per second full auto firing. I don’t remember if this was the case with the original, or if it had to wind up enough before initiating the dart firing. But it’s handy, assuming you can plan ahead while riding.

In terms of distance, the 60ft mark on the box is, within reason, accurate. The blaster is angled a little, and given the firing velocity…even if you can’t reach those ranges at a standstill, you will with forward motion. At least that’s what the math in my head tells me. Oh, high school physics…it’s been a while!

The largest improvement, however, was having an actual, two-wheel scooter. Being able to maneuver and ride normally made Nerf Scooter 2.0 so much easier to use. Even if the previous one was more appropriate for earlier ages…adding a blaster means you really need the coordination to ride a proper scooter, anyway. So having the mobile platform, with a swiveling blaster, was far more useful than the “airplane” style of the original, where you had to lead targets and make wide turns. 2.0 means you can go fast, get close and have a chance to hit the target.

Notably, it’s been compatible with all the magazines I’ve tried thus far. Including the Titan drum.

The blaster is mounted to the handlebars with several screws. There is a ratcheting mechanism for folding the blaster down, presumably for storage or transportation. It doesn’t really latch in place, though, outside of the two end positions. 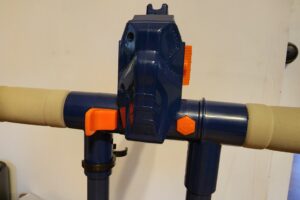 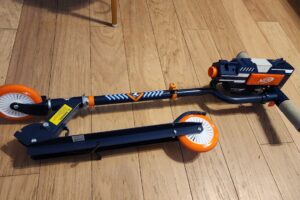 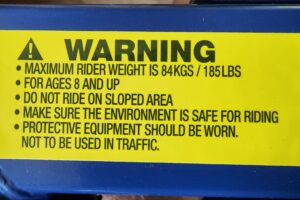 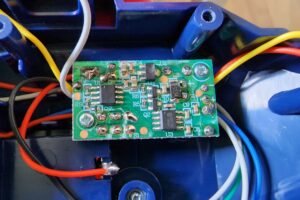 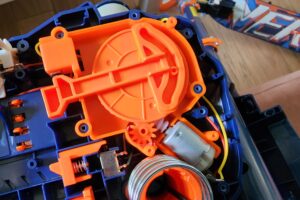 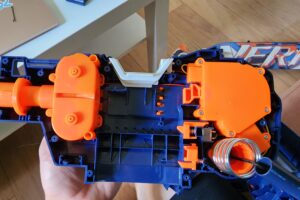 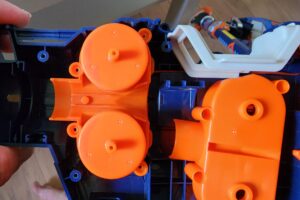 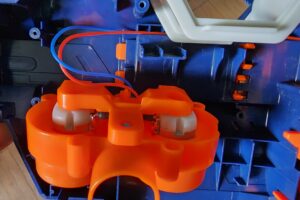 The blaster itself is notably different in manufacture than normal Nerf blasters, with a more boxy aesthetic. However, it’s quite sturdy, and can be easily unscrewed to reveal the innards. The flywheel cage is in two parts (cover and base), but the motors have a large plastic retainer behind them. Presumably, this is to reduce vibrations in the blaster (and therefore the handlebars). For modders, it means the blaster has plenty of space for rewiring.

The pusher is a scotch yoke mechanism, with a control switch a la Rapidstrike. Underneath the pusher box is the main control board. There are a lot of components here, and I doubt they’d like higher voltages. So if you mod the blaster, you’ll need to either remove that and wire something more custom – or have a buck converter for the board itself, using it to signal relays/MOSFETs to drive the motors.

Why couldn’t Flybar have made this Nerf Scooter first? It’s clearly superior in performance, practical riding usage, and carrying capacity. And all for (almost) half the price of the original (I purchased it for $70 at Walmart). I felt like a happy child using it in a Nerf war – and the actual child who was present completely loved riding around the staging area, shooting other people. If you have an active kid who’s into blasters, this is absolutely perfect.