Nerf Rival, despite all odds, is still kicking. And with the blue and yellow Accu-Round line, it seems to have staying power. This year, we see the introduction of the Forerunner, a 12-round. pump-action blaster that pushes the Kronos-style setup toward its feasible limits.

The Forerunner matches capacity with performance, and the blaster is as good as you can get without using actual Rival magazines. If the Pathfinder wasn’t your style, perhaps the Forerunner will be!

This is my Boomstick? 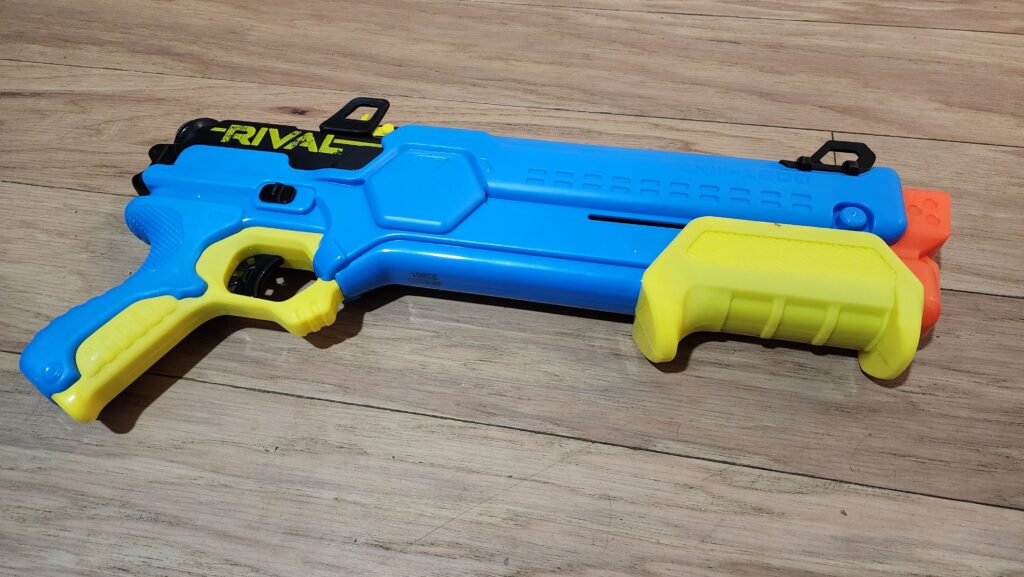 The Forerunner follows in the footsteps of other Kronos-style blasters, like the Takedown and Saturn. The blaster primes via a large pump grip – and in this case, the grip is large, comfortable, and, well, grippy. There is no stock on the blaster (there is a sling point at the back), but the blaster trades the angled grips of previous blasters for a proper pistol grip. It’s large, with a comfortable trigger pull. The grip doesn’t aim to be extra comfortable, by any means, but regular comfort and fitting all older hands is good enough.

Loading the blaster is quite easy. After the initial priming action, the breech opens, allowing the user to insert up to twelve rounds into the internal magazine. Pushing the pump grip forward then closes the breech and loads a round into the barrel.

Seeing as this is an Accu-Round blaster, it’s basically required to have some sort of aiming device! For the Forerunner, Hasbro settled on sets of wide-set sights for general aiming, and a more precise, adjustable iron sight for when you need more precision. It actually works in this case – in a regular war, you’re going to be generally aiming from the hip (or at least below the shoulder), so large basic sights are good enough for that. And if you really need to, you can hold the blaster to eye level for making a better shot. 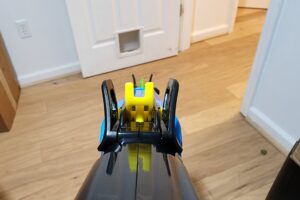 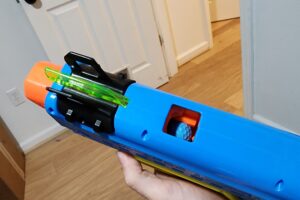 The Forerunner doesn’t have slamfire. It doesn’t really need it, in my opinion, but if you’re looking to spam Rival rounds in that fashion, then the Forerunner will disappoint. But only in that regard.

As is tradition, the blaster has both a priming indicator and a priming release button in case of jams. The safety sits above the trigger.

The Forerunner fires wonderfully, with an average of 102fps in my testing, and two balls per second rate of fire. The Accurounds do seem to be slightly more accurate than regular Rival rounds; at some point I’ll have to sit down and do a serious ammo-type comparison.

As for war performance, I found the Forerunner to be more than adequate, even playing against vastly superior blasters. Though in that case, cover helps!

As per this Reddit post, the internals are largely what you’d expect if you’ve ever opened up a Takedown or Saturn. Due to the length of the blaster, there has to be a linkage connecting the trigger to the catch, and it sits around the end of the internal magazine.

There’s not much room to add capacity, given the generous length of the magazine and the need for it to move back and forth. There are, however, some 3d printed mods already being made for the breech and the addition of a stock…

The Forerunner handled better than expected, and was a blast to use. If you’re the type to reload on the fly, but still want good capacity, the Forerunner is hard to beat. At the very least, Nerf keeps making solidly designed blasters when it comes to the Rival line.