(This blaster was included as part of a larger, free care package from Hasbro. Thanks!)

The Titan is one of Nerf’s two big blasters for Fall 2019 (the other being the Rival Perses). It works decently well, provided you use the included drum or a newer magazine (aka one that isn’t old and worn). It has the minigun feel to it, complete with giant spinning barrel and top-mounted carry handles. It’s also completely impractical. In the end, you’re paying $100 for a giant hunk of unwieldy plastic – one that is essentially a Hyperfire with a giant drum attached. And I’m just not sure the “movie experience” of carrying the heavy weapon is worth the price, in this case.

The large barrel in front does, in fact, spin. It rides within ridges in the shell, and the “faux barrel” for darts just sits inside it. One tactical rail sits on the end of the blaster, if for some reason you find an actual use for it.

The rear of the blaster, meanwhile, contains the blaster itself. The front grip sits on a swivel and is sized for kids (the target audience). The rear handle is more substantial, with a lower rev trigger and a top mounted fire trigger (with cover). The D batteries go in the back.

There is a jam door on the left side of the blaster, in case of firing issues.

Overall, it feels as solidly constructed as most other Nerf blasters.

The Fifty Round Drum Arrives!

Of course, one of the selling points of the Titan is the 50-round drum. It takes up about the same space as two 25-round drums, with the darts making a serpentine route inside the case. It also feeds consistently – at a recent HvZ game, I threw it into a friend’s modified Rapidstrike and it sprayed darts without issue.

Of course, you could fit more darts in a smaller space with three stick magazines. But if you really want the giant drum, it works great!

This point, however, is where things start to get rough. I used the Titan during a very long mission at my last HvZ game, and got to discover how ill-equipped it was for the task.

First, the large blaster made it hard to move around without bumping into objects or people. That largeness also translated into other difficulties, such as reloading. When you have a giant, top carry blaster with the magazine at the bottom, you spend way more time changing magazines than you would on other blasters.

The blaster being large and heavy means you also aren’t able to run quickly or maneuver it to make shots. A Rapidstrike? You can at least peek around corners, or try to go fast enough to move around shields or cover. The Titan? Not so much.

The blaster was also not great for aiming at and hitting targets, due to its size and placement. The Prometheus, while also underslung, spits out balls at a super high rate of fire and velocity, with enough spin to travel relatively straight for a time. The Titan, in comparison, aims much higher and fires at NStrike Elite speeds. As such, targets have moved out of the way by the time the dart completes its (roughly) parabolic arc.

Finally, the blaster absolutely requires newer magazines – old magazines that (from age, use, dirt, you name it) don’t feed quite as well won’t fire at all. At several points, I’d pull both triggers and have no darts come out. Belt pushers are more sensitive to magazines feeding than other kinds of pushers. I can’t really penalize a blaster for that, but for users with extensive and well used collections, it is something to note.

I should also note that magazines with oversized or slightly off retention slots don’t sit high enough in the magazine well to contact the belt. This is mainly a concern with offbrand magazines, but even Nerf isn’t immune; my Fortnite AR-L mags are brand new, but have oversized retention slots. Those have to be physically pushed up into the blaster before they feed properly.

The Titan has fairly standard performance for a store-bought blaster. Through the chronograph, darts averaged 69fps. The rate of fire averaged about three darts per second out of the box. 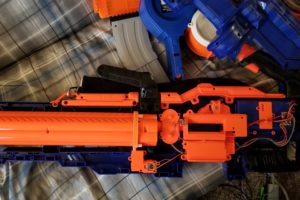 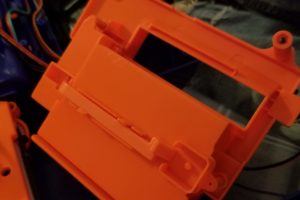 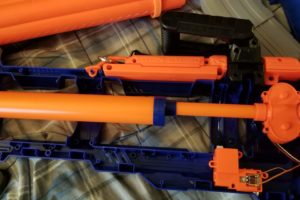 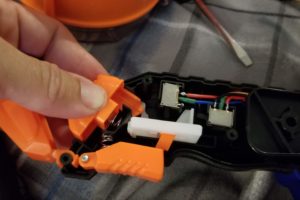 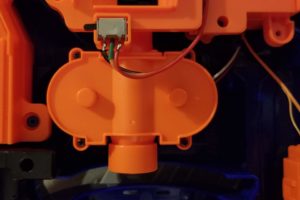 The Titan CS-50 has relatively few screws, compared to its size. It’s also a ton of open space, so you shouldn’t have any worries about things fitting inside.

Of note is the motor cage, which has a different design compared to past flywheel blasters. I wouldn’t expect a custom cage anytime soon. Otherwise, the blaster is effectively a Hyperfire, and should be able to be modified in a similar manner.

The “faux barrel” coming out of the flywheel cage is fairly long, and then dumps into an even wider tube. Such is the life of a blaster that’s three feet long – you have to actually take gravity into account.

Do I Buy This?

As much as I like the idea of a “heavy” blaster, the Titan just doesn’t fit the bill like the Prometheus did for Rival. Standard dart performance, combined with a giant blaster that’s hard to use, reload, and maneuver with, just doesn’t add up like it should. For the platform to be effective in any way requires darts that actually travel a fair distance before dropping. That means modification beyond stock firing velocities. And for the general consumer, that’s not really an option. For a tinkerer like, me, meanwhile, that still means dropping $100 on a blaster that is going to take even more time and money to get working like I want it to.

When this blaster goes on sale, it might be worth buying to try out (and to get the drum, if you’re a fan). Until then, I can’t see a good reason to buy this before other, better, blasters.