(This was sent for free as part of a larger care package. Thanks, Hasbro!)

Of Hasbro’s $100 blasters displayed at Toy Fair and available this fall, the Perses is by far the better option. It has a more comfortable, smaller form factor than previous full-auto Rival blasters, keeps the drive train and rechargeable nature of the Prometheus, and can handle most things you throw at it. If you’re going to drop that kind of money on a new blaster, this should be at the top of the list.

I love my Nemesis, but it’s long and heavy. Less so with a rechargeable battery, but it’s still a bit much, especially for long HvZ missions. Meanwhile, the Prometheus is a fun “heavy” type blaster, but chances are you’re not running at all when using it.

The Perses, meanwhile, feels perfectly balanced. The stock fits the shoulder, the large main grip sits under the ammo hopper, and your front hand sits anywhere under the front (or in front of the battery tray). The plastic all feels thick and sturdy, I can’t think of a more comfortable Rival blaster. (Of course, a safety sits above the grip.)

The blaster has two sling points, one under the main grip and the other beneath the barrel. However, with how light the blaster feels in both hands, I have yet to need to use them. 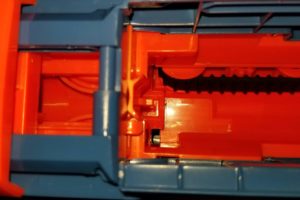 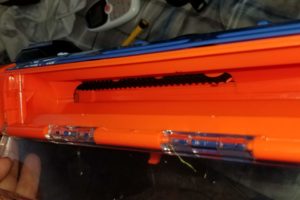 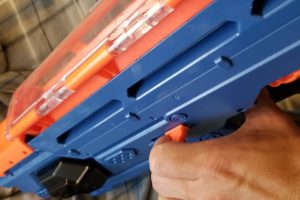 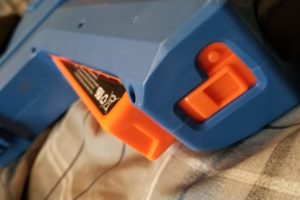 The Perses has a fifty round hopper; it’s thin in terms of stacking balls, but also ends up working so well that an agitator isn’t needed. It slopes in the right spots to guide balls to the elongated feeder belt, and only twice have I needed to shake the blaster during normal use – actually running around and playing HvZ or wars. There’s no button for the loading door; just grab it and flip it up (the hinges are on the left side).

Note that the hopper can be ejected with a pull handle on the left side, and fully contains all the balls within (a small gate keeps the balls in place at the bottom).

The front of the blaster, meanwhile, has both a basic sight and a jam door – a nice improvement on the Nemesis and Prometheus.

Under the middle of the blaster sits the battery tray, which holds a proprietary 9.6V, 1500mAh NiMH battery (the blaster includes both the battery and a charger). It sits inside the tray, and using the release button lets it pop out of place for removal.

As is usual with Nerf flywheelers, the rev trigger spins up the flywheels, and the main trigger runs the pusher mechanism (in this case, the feed belt).

Shooting on a freshly charged battery through my homemade chronograph, the Perses averaged 99fps on fully automatic fire. Single fire is possible, but takes a lot of trigger discipline.

Speaking of rate of fire, I averaged 9 balls per second when holding down the trigger. If you really want to guarantee your target has been hit, this is the blaster!

I got to use the Perses extensively in this past weekend’s double-header of Saturday HvZ and Sunday war. For HvZ, it was basically perfect. It had the high rate of fire if I absolutely needed it, but I could still single shot targets to save ammo. Granted, it holds less ammo than a Nemesis or Prometheus. As a result, you can’t just run into a horde by yourself and expect to take everyone out. But it’s light enough that you could run around them and deal with smaller groups as needed, popping in more ammo as you go. You simply have to think a little more about how to sustain your blaster than you would with the heavier options.

For Nerf wars, meanwhile, the Perses was a lot easier to use than the other options. It’s small enough to actually use cover effectively, and to shoot around objects. I used plenty of other blasters throughout the day, but I kept falling back to the Perses.

The Perses is set up similarly to the other Rival blasters, with the two triggers and various other parts wired together. Note that there’s only one “safety” switch, and it sits up front – the jam door and hopper both share a mechanical link to that switch. The rod that presses that switch only lines up if the door is closed. THEN, it gets depressed when the hopper is present and the loading door is closed.

Another interesting fact: the battery has four contacts, but only two wires lead away from the battery tray. Two contacts are connected to each wire on the blaster side. I’m guessing this is to double the contact area to handle the desired current?

The Perses is a natural evolution for the Rival line. The previous blasters went for bigger and better, but the Prometheus pushed the limit in that regard. Seeing all those features return in a smaller form makes for an amazing blaster.

And yes, I’ll gladly buy one for myself, just so I can dual wield them! At least when it finally comes out, in October. Ugh, the wait…