Dart Zone has a thing for silly yet completely viable “minigun” blasters. The Scorpion, for example, is still on shelves after many years. This year, we have several options. Those with a preference for dart hoppers, of course, have the excellent Destructor to find at Target. For those who love their chain-fed blasters, however, Walmart has a notable update in the Adventure Force V-Twin. Ammo capacity? Ease of reloading? High velocities? All of them are here, in an inexpensive package!

The V-Twin keeps all the nice touches of the Scorpion and other previous Dart Zone chain blasters. Namely, the chains and the spinning barrel. The chain itself is a different design than previous ones, but for an important reason we’ll show in a bit.

Otherwise, the blaster has all the things you’d expect. A front carry handle, a rear handle for firing, etc. This time, the blaster has both a rev trigger and a firing trigger, as opposed to an On/Off switch and a single trigger.

The blaster features two snap-on “wheels” for the chain to ride on, but they serve an extra purpose as dart storage. With extra darts at hand, it becomes much easier to reload the chains in place. Of course, if you have another chain, you can always pop open the loading door, remove the front handle, and slide the chain off the front of the blaster.

As is standard for Dart Zone blasters these days, the V-Twin runs off of 6 AA alkaline batteries.

Pulling the rev trigger sends power to the flywheel motors. After that, pulling the firing trigger both turns on the spinning barrel and feeds the chain through the blaster. In past blasters, a complex internal mechanism moved a pusher rod back and forth through the open rear face of the chains. In the V-Twin, we see instead what amounts to an adapted Hyperfire chain.

Here, it’s just a small wheel that lines up with open grooves in the chains. So far, it works very effectively in moving darts into the flywheels at high rates of fire. More importantly, it eliminates a potential failure point; if anything at all misaligned in the old design, the pusher impacting hard plastic could break things. So it’s a substantial improvement.

Being a hip-fire blaster, aiming isn’t as natural as it would be in other blasters. But it still looks cool!

My V-Twin, on full batteries, averaged 86fps on full-auto blasting. More importantly, it did this at five darts per second. Single shots can potentially go into the 90s, but high (and consistent) performance at full auto is a huge plus. 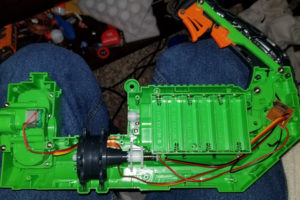 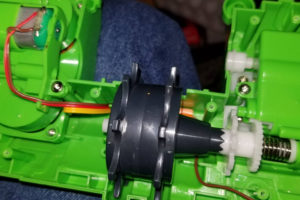 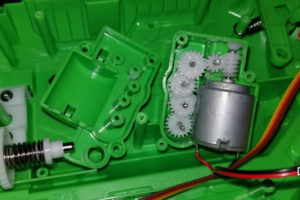 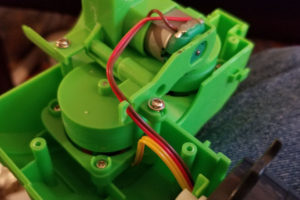 The V-Twin is a very organized blaster. There’s realistically only room for one switch in the rear handle; as such, a linkage connects the firing trigger to the real switch deeper inside the blaster shell.

The motor handling the chain and dart feeding is a slightly different one from the rest (similar to that of the Destructor). It also sits inside a well lubricated gearbox; one gear turns the chain indexer, and another turns a female connector (the male connector, attached to the dart feeding wheel, sits on the chain door).

The flywheel cage appears to be the same design (in terms of screwposts) as most other Dart Zone blasters. This one, of course, has extra plastic on it for mounting the final motor that spins the barrel. I don’t know of any designed cage that keeps these bits, so upgraded blasters may need to lose the spinning barrels. At least for now.

Dart Zone has improved on their chain-fed blasters with the strong and consistent V-Twin. From adding a rev trigger to changing how darts feed into the flywheels, the blaster is full of improvements over older models. If you want a “minigun” that performs but isn’t a giant, $100 hunk of plastic, the V-Twin won’t do you wrong.