Author’s note: Credit to David Coleman, one of the Bay Area dads, for taking such great shots of the action this weekend. You can find more pictures from The Stalking Dead 2019 here.

After all the modding and Convention action, Ragfest moved to the core part of the weekend: actual playtime! First up, of course, was The Stalking Dead, a Human v Human v Human v Zombies game that took up most of the afternoon and early evening. Humans fought to control resources and defend themselves from the ever-growing zombie threat, and it all ended with (surprise surprise) the end of the world! There were some hiccups along the way, but it was a great game on the whole.

Part One: Building the Base 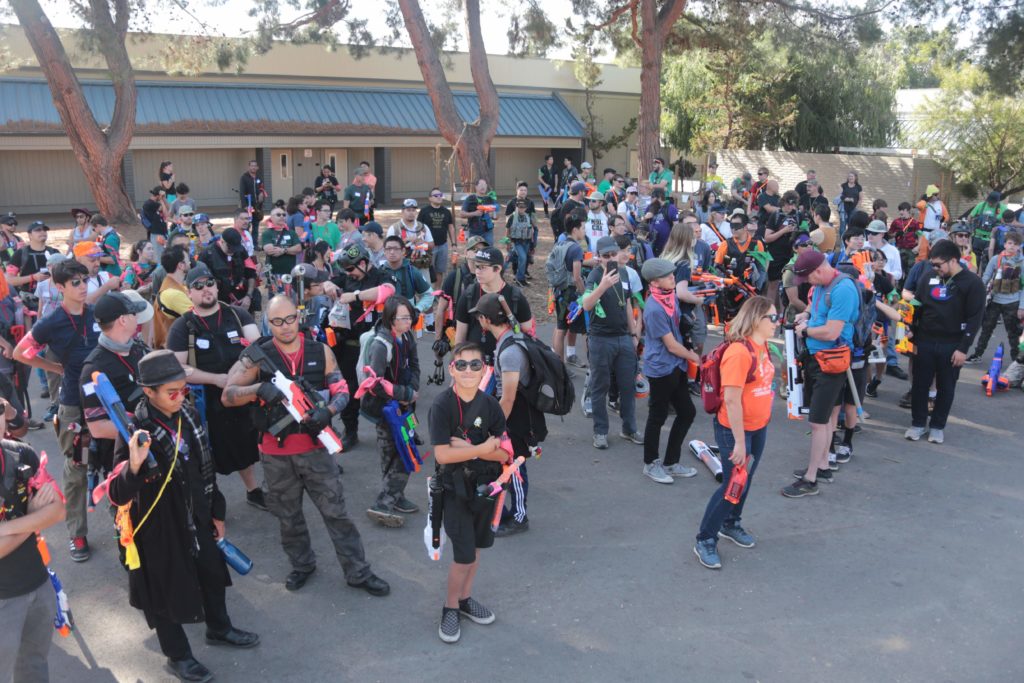 The first mission revolved around building up our fortifications and amassing supplies. Humans had ten lives each to start (runes granting more could be found), and 54 pieces of ammo. Items of food and water scattered about could also be turned in for Victory Points (which mattered later in the game). Finally, challenges from the Gods (Thor, Odin, etc) could be completed for individual or team bonuses, like healers or safety circles.

I spent the first part of my time mainly holding off members of the red team, the human base closest to us. The Revreaper on hand wasn’t the best blaster on the field, but it was sufficient for holding people behind cover once they realized I could actually hit them with it.

I might have also been one of the first people to lose a life, just from running out there and meeting a certain Canadian 5v5 teammate…that was on the red team. I’LL GET YOU, JEFF!

Towards the end, after HvH action began to stall without much ground gained or lost either way, I switched to using just a Nerf sword and a couple socks, acting as a buffer between our base and the zombies; their base was to the south of our own. 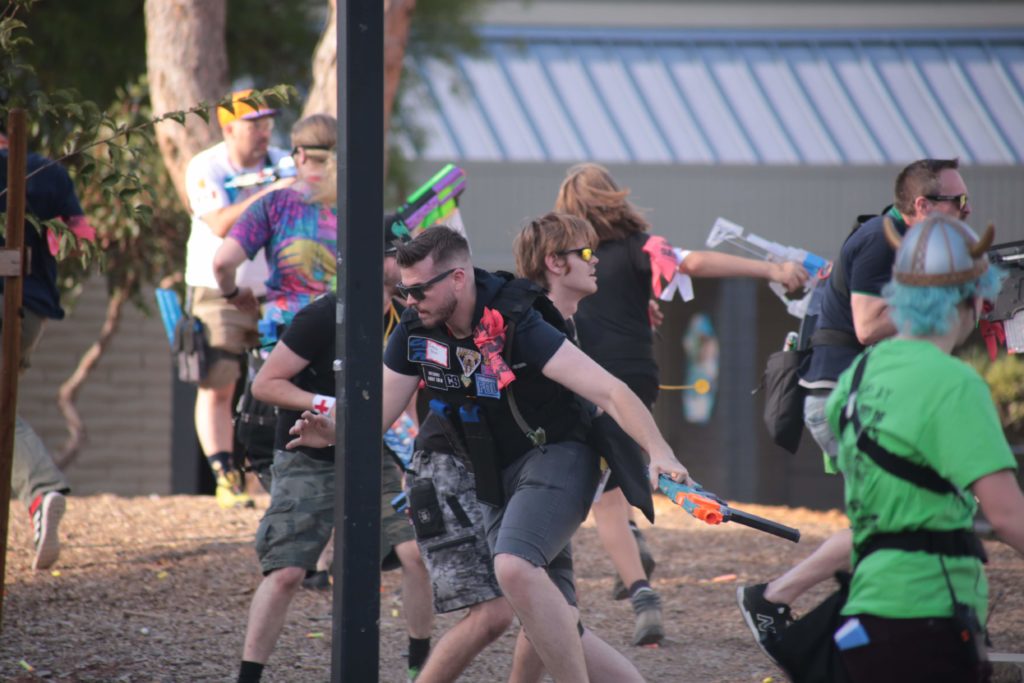 After a quick lunch break (I walked to Subway), we came back to start again. New resources and ammo caches were out. Leftover runes were discovered. And the zombies grew more active and more coordinated. I left all my fully loaded mags at base and made rounds to our south, joining other humans on different occasions and chasing zombies down as needed.

Meanwhile, a few other exciting things occurred on the other side of the play area. Blue team, being near the zombies, occupied itself with defense and resources. However, the zombies had begun their planned “base raids” at Green. Due to a miscommunication of rules, however, they ended up having essentially infinite respawns. Green base was virtually destroyed, with only a few human survivors that made it out, or were elsewhere on missions for the gods. Red then took their supplies and barriers to make their base impenetrable – and apparently to also block zombies. This meant that Blue was the only target left…but we had sufficient defenses to stop attacks, under the proper zombie respawning rules.

Mission 2 ended on a ceasefire, with red and blue agreeing to move on to the finale – we said yes immediately, knowing that with Red being immune to zombie attacks on their base, they could just wait us out. However, Red thought we had fewer people, and thus weren’t as major of a threat, and decided to agree. So we survived for a while longer. 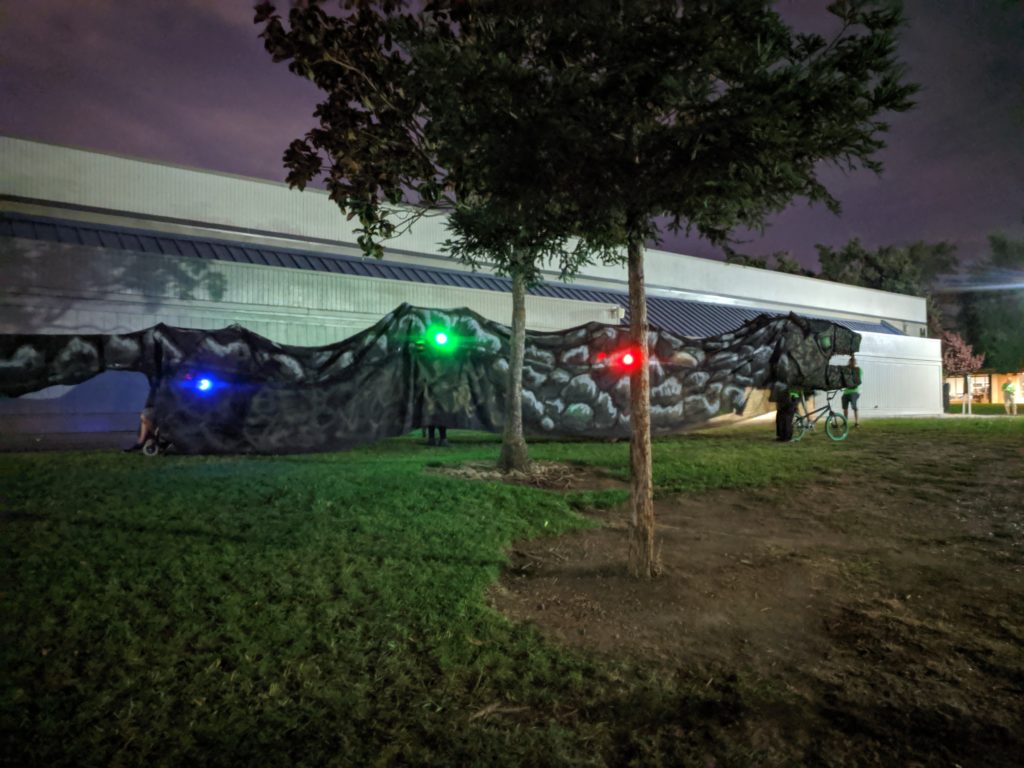 For the Finale, the three teams were reunited with their fallen zombie counterparts for the final battle. Zombies could attack and tag members of the other team colors, while humans either fought off other zombies or attacked Jörmungandr, the World Serpent. Various targets could be shot on the serpent, which was heavily defended. Proton packs everywhere for defense, whether mounted on the serpent itself or being carried by NPCs like Captain Xavier. All players went back to their sides to respawn as needed, fighting to score the most points; Red started with a lead after their work in the first two missions. 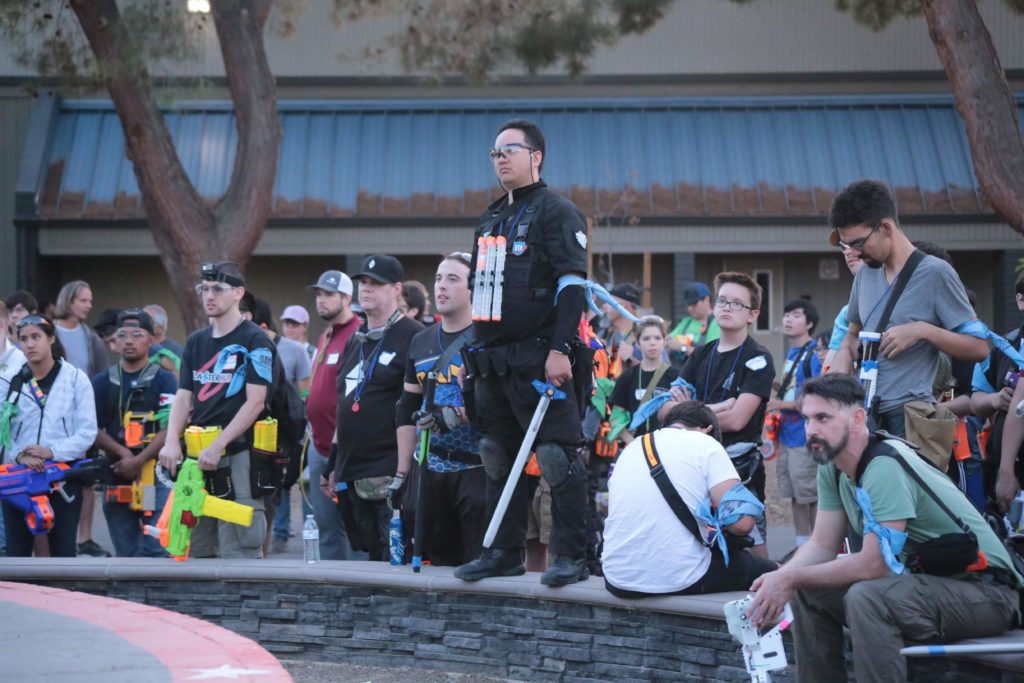 While extremely fun, a few things did break down in terms of gameplay. For example, due to a last-minute change in Finale location, serpent movement became extremely difficult. As a result, it started in the corner next to Red base…and stayed in that area most of the time. (Best laid plans, etc) Other issues cropped up, like one team being told zombies could not enter their respawn area, and not the others. Even with the various issues, it was a frantic battle for superiority, with Red winning.

For my part, I continued using my sword, and tasked myself with fending off any zombies that headed toward our team’s respawn area. Essentially, keep up a wall so that the other humans could run toward the world serpent and back as needed. Whether that was effective is up for debate, but for the most part myself and a few others were able to keep back the zombies on our small stretch of ground. In my case, chasing off zombies with a sword so many times before at least made some players hesitant. 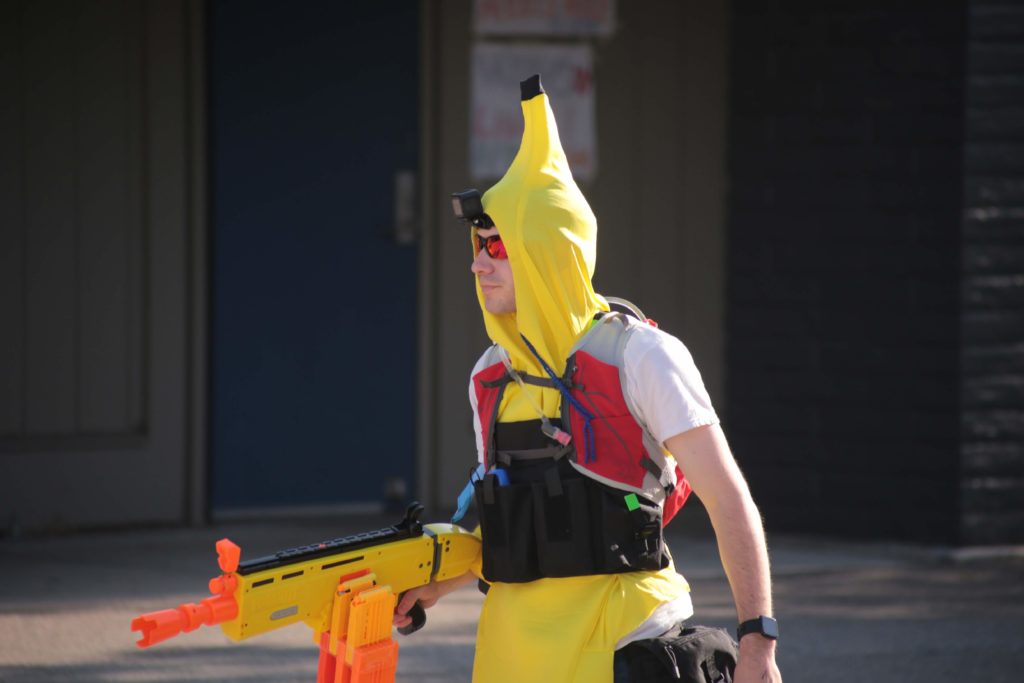 A quick thank you, however, to that one player who made a good move and was able to tie me on the tag, but then just took it anyway. That’s how I try to play as a zombie, wanting a clear win, and it was much appreciated.

Sadly, however, humans died, and it turned into waves of zombies attacking our base. We survived a few runs, but eventually I was the only blue player left. The next wave took me, but not without some difficulty – there were at least ten sword tags before someone ran at my side and got me!