Blasters like the Alternator make reviews hard to do. They’re specialty blasters that can do multiple things, so you have to do your best to judge the sum of the parts. Luckily, the Alternator performs well given its unique setup. That, combined with the cute junkyard aesthetic, makes for a fun blaster to start off the Zombie Strike line in 2020.

Not THAT Kind of Alternator

Despite the name, the Alternator isn’t an electric blaster. Instead, it refers to the ability to alternate your shots between one, two, and three darts. It’s simple in operation – pull back the plunger rod by the handle, choose the desired barrel assembly, and fire. The barrels don’t lock in place, but the assembly is built in a way to clearly index between them. Mine takes a decent amount of force to switch between barrels, making it unlikely that you’ll switch barrels on accident.

The blaster itself has a nice design, keeping with the current idea of blasters made from spare parts. There are chain links, wrenches, sheet metal, snap ring pliers, and other designs molded into the shell. In addition, the small touches like the notches in the plunger rod for “kills” give the blaster more personality. A fake wrap around the handle seals the deal for the aesthetics.

The handle itself is small, but open. It’s also comfortable wide, so most hands should fit it nicely. It’s not perfect, but it’s serviceable while keeping with the theme. Meanwhile, the spring is quite strong, but easy to prime thanks to the plastic loop at the end of the wrench…er, plunger rod.

My Alternator hit 72fps on average using just the single barrel, which by itself is quite nice for a Nerf pistol. More importantly, the isn’t a significant drop-off with multiple darts. As best as I could measure, two dart bursts averaged 65fps, while the three dart burst saw 52fps. There’s only so much plunger volume to work with, so the last shot really trades off velocity for potential dart spread.

A fully loaded Alternator will give you one shot every second, accounting for the time to switch barrels. Loading up the barrels fully may take some time. However, you don’t need to load all the darts if you’re in a hurry. Since every barrel has an air restrictor, it’s perfectly possible to load one dart by itself in the lower barrel assemblies and fire at full velocity. Sometimes, it’s best to load a single dart and tag a charging zombie out than to wait too long trying to load every barrel. 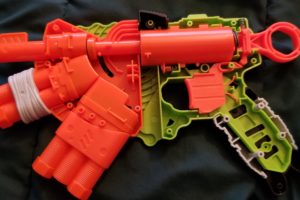 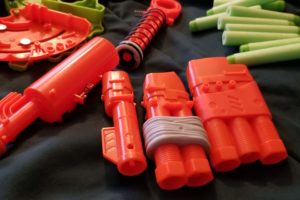 The Alternator has the expected setup for a spring-powered pistol. There’s a bit of dead space between the plunger tube and the dart barrels, due to the rotating design, but it apparently doesn’t hurt performance that much (It also accounts for the need to actually have a trigger and handle for basic function). Each half of the rotating barrel assembly slides on a series of push-in metal rivets, so you’ll have to remove ALL the screws before the blaster can split in half (one screw is reached via a strategically placed hole in the shell).

Once apart, you’ll find the barrels themselves are contained units that snap into place.

The Zombie Strike Alternator is a quirky pistol that does something new, and does it fairly well. Single shots have good power to them, but there’s enough oomph to do bursts as well. I personally love the look, and I appreciate the little touches. It’s a unique style of play, and one worth looking into because of that.