This is another announcement that isn’t a surprise, if you’ve spent decent amounts of time browsing the internet, or noticed things like official Stephen Curry Super Soaker-themed shoes. Even so, details have been sketchy up to this point. However, we now have a press release on the next line Hasbro is showing at Toy Fair, along with some nice details. They’re Target exclusives in the US. And they’re under $20! 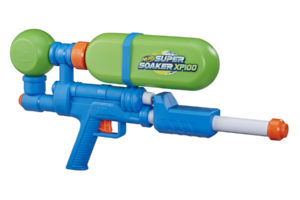 Most people remember the good old days, when you had to actually pump up a soaker to fire it. It took a while, but it also meant great distances and shot times. As with many other things these days, we’ve circled around back to the originals.

The reimagined blasters are the XP100, XP30, and XP20. Why this naming convention was chosen, I do not know, because the originals were not XP, and the XP designation itself originally belonged to a different line. I digress.

In any case, all these blasters are expected in the spring, exclusively at Target in the US, with varying capacities. No range claims are made, so future testing will simply have to happen!