Five Below never fails to have interesting (if cheap) things pop up from time to time, be it Alpha Strike Uppercuts or offbrand oddities. It’s the latter in this case.

The “Hero” blasters have offered cheap blasting thrills in red and blue for a few years now, with varying small blasters. This time, however, it shoots Rival! Is it worth the $5 price? For most, not likely. However, if you enjoy tearing apart blasters, it may be worth a peek.

This was unexpected, for sure. If you remember Power Poppers (or even farther back to things like the Nerf Reactor), those blasters have balls in a tube, with a round rubber or plastic sealing ring. Once enough pressure builds, the lead ball pops out and travels toward the target. However, it’s a system I can’t recall ever seeing used with Rival ammo before.

There’s no hop-up to be seen, but given the advertised 25ft ranges, it’s unnecessary.

ThIs blaster comes with eight balls, and holds three in the tube at one time. After loading them all in the front, you operate it like a normal blaster. Pull back the slide prime, return, then pull the trigger to fire.

It’s not Nerf quality plastic, but for $5, it’s reasonable. The handle is small (this is definitely made for small children), but for an adult it’s serviceable. Given the novel design and what it does, it’s at least (partially) forgivable.

Rate of fire is decent, at two shots per second. Of course, when you only have three balls, that’s largely irrelevant. This is clearly more fit as an emergency pistol than anything else…especially with the ranges.

The box claims 25ft ranges, which is hilarious on its face compared to other blasters ($10 gets you a Sentry or an Apex from Dart Zone, after all). Chronograph testing got an average of 34fps, which is technically enough to make those ranges…sometimes. 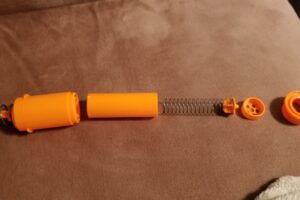 The Ball Dart Blaster (such a lame name, I know) has a small saving grace for modders: a large plunger tube. You have a  42cc volume to work with, and shoving a 13mm barrel into place without regard for optimization fired half darts at 110fps+. Keep in mind, it’s a cheap (and cheaply made) blaster. So spring upgrades, etc. may result in destroying the blaster without serious reinforcement. But if you want to experiment with a cheap pistol for firing darts at high speed, you at least have a candidate.

Do I regret paying $10 for two novelty blasters (one in each color)? Not at all. It’s pretty unique, it works, and I’d be completely fine with a young kid using it (while expecting it to be destroyed eventually). But as a blaster, it’s laughably bad compared to what’s out there. Still, if you like to tinker, it might be worth a look.