TNTina is a character in Fortnite…playable? Boss character? Person that goes on a poster to look good? What do I know; I don’t play the game!

Anyway, apparently when you have a popular character with a fun in-game weapon, Nerf will make their own version. In this case, Hasbro also gets to have their semi-regular bow blaster release. Is it practical? Not really. But is it fun to use? Absolutely!

Haven’t We Seen You Before? 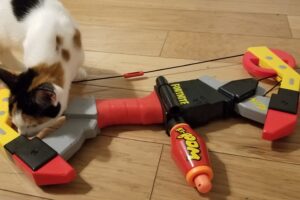 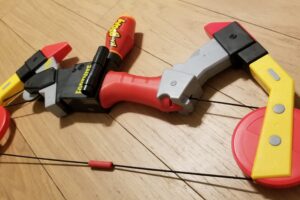 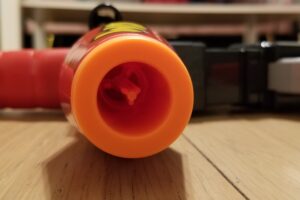 If you think back, you’ll remember the existence of the Mega Lightning Bow. Load a Mega dart, pull back on the string, and release to fire. Well, this is the exact same thing, aside from the more liberal use of plastic and the Fortnite theme!

Aesthetically, it’s silly, with the cams just serving a decorative purpose. In fact, full pulls of the string (which loops around to the plunger) will bend the plastic inward a bit. Not much of a worry with kids, but adults will find the blaster stretching out faster as they pull the string back each time.

The bow fires as fast as you can load it…which for a bow, is decently slow. Assuming you have darts on hand, once every three seconds is a good expectation. Furthermore, the average velocity if you pull all the way back is about 65fps. Trying to rapidly get off shots (or being younger) will result in weaker shots. Of course, using standard Megas means not expecting great accuracy.

The plunger is rather large, so you could try doing some silly things. Just remember that the string probably isn’t rated for that large spring you want to install!

What can I say? Bows are largely a matter of personal favor, as 90% of toy bows don’t really offer much in terms of competitive edge. Firing oversized ammo helps with the appeal, of course. Even so, $25 seems a bit much. Beauty (or fun) is in the eye of the beholder, I guess!