Dinosaurs have been one of the big trends in toys over the past two years, and both Nerf and Xshot have released dinosaur-themed product lines. The response from Dart Zone is…an old blaster with a dino scope?

Admittedly, this feels like a case where Walmart Canada asked for a blaster, got shown something, and asked if a dinosaur could be added. Nevertheless, the Dinoblitz is still a Blitzfire at heart, and a great blaster for the price.

The Blitzfire was released five years ago, featuring great performance out of a two pack of blasters. It was also a Target exclusive in the US. The blaster got a facelift this past year. However, that doesn’t mean the old version has to be abandoned. In this case, it’s simply in a different market.

The blaster itself is the same, inside and out. Loading slots sit on either side of the barrel. The extra long trigger pull first rotates the cylinder, then fires the dart. It ships with 12 waffle tip darts.

The blaster averaged 82fps, more than enough to hit the 80′ range claims. Two darts per second is a bit slow compared to other blasters, but still respectable. Even without the “scope”, it’s a good sidearm. 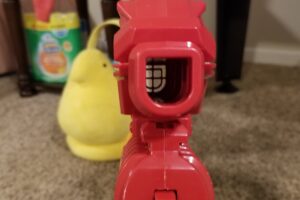 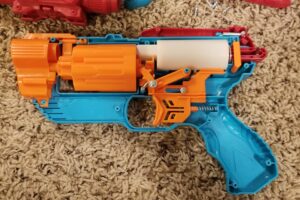 Internally, as with the previous blaster, the cylinder has a pawl rotating it (like a revolver would in real life), moving it 1/6 turn at half trigger pull. Pulling the trigger the rest of the way then lifts the catch, letting the spring and plunger do their thing.

The flap in front of the cylinder prevents firing anything other than regular foam darts. Removing it at least makes it possible to fire half lengths, should you only be able to find those on the field of battle.

The Dinoblitz really does seem like an easy attempt to cash in on the recent dinosaur trend. Even so, the base blaster is nothing to sneeze at, especially for the equivalent of $8 USD. And it’s hard to argue against a blaster offering this performance compared to the similarly priced Nerf Stegosmash – though the Xshot Dino Attack revolver will give it a good run for its money!