It’s that time of year, when the Christmas stuff gets moved out, and the spring toys slowly move in! As usual, Walmart has various blasters appearing under the Adventure Force line – some from Dart Zone/Prime Time Toys, some from Buzz Bee Toys, and still others from other companies. Let’s look at what’s coming, shall we?

Gatling Blasters – Not Just For Darts

Last year, Prime Time Toys had the Hydro Burst, a unique new soaker with a two-part priming mechanism that fired substantial shots in a burst. This year, that blaster is back, but under the Typhoon Burst name. Of course, it has a new color scheme, but I expect it will perform the same as before.

However, this year is also seeing what appears to be a further adaptation of the internal mechanism. Enter the Gatling Blast Pressurized Water Blaster. For a bit over $22, you get a large minigun-style blaster with a forward priming handle, a large reservoir underneath, and a spinning barrel effect. Admittedly, that description does just seem like an Xshot Crusher for water. But the pictures paint a different picture. 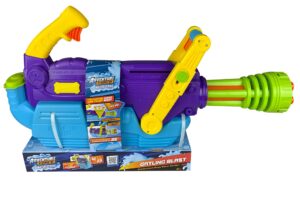 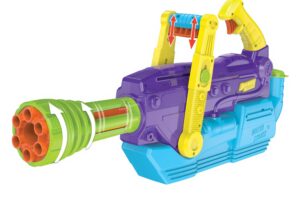 As you can see, in terms of style, this seems radically different from other PTT soakers (the molded Z emblem and “Fueled by PT-DZ” notwithstanding). Holy crap, this takes the goofiness of soaking to a new level. And it’s one I enjoy quite a bit.

Naturally, being a large PTT soaker, there’s a Blitzfill cap for fast filling. Presumably, there’s a spring-powered piston inside. How it compares to the one in the Typhoon Burst, however, remains to be seen. I await my Walmart order.

Of course, Buzz Bee always has something on the shelf, and their style doesn’t vary too much. In this case, we have the pump-to-shoot Spiral Blast. It’s a similar format to other Buzz Bee soakers, down to the fake trigger. The gimmick this year is twin spinning barrels for that twisting stream effect. Yes, you’re crossing the streams, yada yada. 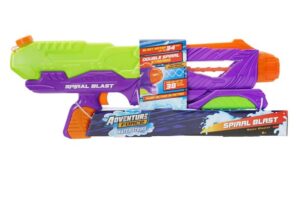 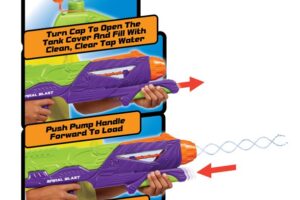 Internally, the barrels are fed from one common tube, contained within a corkscrew. A piece linked to the pump grip moves along the corkscrew, spinning it on the pull. The return action sees that piece ratchet past the ribs of the corkscrew to reset itself. There’s a clear window in the blaster showing this action. Admittedly, lights or some other effect would have made it look cooler, but $15 gets something neat regardless. 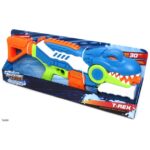 Finally, because everyone is jumping on this train…there is in fact an Adventure Force T-Rex water blaster! I’m unsure of the manufacturer right now, so we’ll have to wait and see what it says on the back of the package. But honestly, I’m a fan of the styling on this one. It feels like someone took the Rex Rampage, made it into a soaker, and made it somehow more cartoonish! It appears to just be a pump-to-shoot soaker, but at least you’ll be soaking in style. The T-Rex blaster is retailing for $15, once it hits shelves.