The Bug Hunter came out of left field, quite frankly. A blaster company suddenly making a salt gun? It was odd. Even so, the Bug Hunter is one of the more interesting offerings from Buzz Bee Toys, if only because it does so many things right. It’s a novelty, but it makes me wonder if Buzz Bee could make their regular blasters match it in quality and comfort. 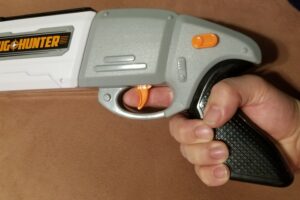 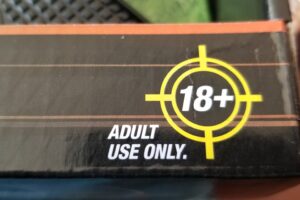 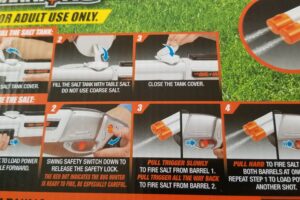 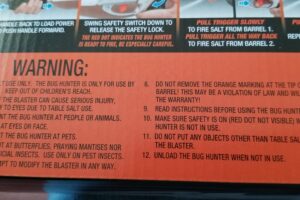 Being a non-foam blasting product, the age recommendation is obviously different on the Bug Hunter. It’s recommended for adult use only – they only want people 18+ expelling salt granules at high velocity, and only at the desired targets.

However, as a product for adults, the Bug Hunter has to be made specifically for adults. Which means it actually has a comfortable main grip! Honestly, I wasn’t sure Buzz Bee Toys could do it, but having this in hand gives me hope.

The Bug Hunter has the feel of a combat shotgun, with a great grip and a large priming handle. The priming handle has wonderful contours, and the molding makes for an easy grip. In addition, the flat front surface translates to a great thumb rest for priming the Bug Hunter – and believe me, it’s a beefy prime. In any case, you’re likely to find a comfortable way to prime the blaster.

The Bug Hunter fires table salt to kill flies and other soft-bodied bugs. It does so with a hopper and two rotating chambers. These two chambers fill with salt in the vertical (default) position. As the trigger is pulled, these chambers rotate in line with the barrels prior to firing. It’s a creative solution for making a double-barrel salt gun work, and it works well.

The blaster does have an ambidextrous safety switch, and you have to engage it every time you want to fire. That might be an annoyance to some people, but for an adult toy, it’s perfectly fine. It just means that the user has to be certain they actually want to fire salt at something. There’s a Buzz Bee style rail on top of the blaster, should you have any accessories to add. It’s not like a scope or red dot sight is really going to help you…but for the sake of fantasy, it’s there.

The Bug Hunter…hunts bugs. Does it do that job? To a certain point, yes. Salt granules lose velocity quickly, and the farther away you are, the more they spread out. Even so, if you’re within a few feet of the target arthropod, you’ll easily score a hit. Of course, the type of target will determine the effectiveness. A fly? 3-4 feet away is doable, though closer is better for guaranteeing a kill shot. A wasp? Good luck, buddy, you just made it mad. I suggest using something else. 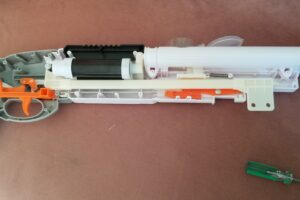 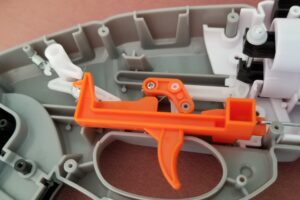 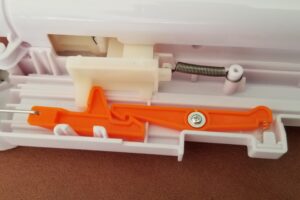 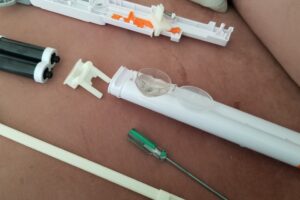 Once you open up the blaster, you can clearly see the Buzz Bee style engineering that made this possible. The internal mechanism is similar to that of a Double Shot (or more recently, the Double Fire), with a two stage trigger firing one plunger at a time. The plungers have multiple catches, going up to a full prime of ~2 1/4″. Unlike the predecessors, you’re directly priming the blaster. The Double Shot and other related blasters all primed by breaking open the barrels, and using a long string and pulley system to pull back the plungers. As such, it’s somewhat hard to compare the strength of the main springs to previous blasters. In any case, it feels strong enough to send darts downrange a fair distance, if a dart version were ever made.

The barrels and salt loading mechanism are their own unit, should you elect to experiment and replace that section. I’m sure there are other Nerfers out there who will do exactly that!

I’m going to refrain from scoring this item, due to it being such a novelty. Why rate ranges for a salt blaster? Nevertheless, it does what it sets out to do, and I have killed flies with it.

The better question is why can’t Buzz Bee Toys make more dart blasters like this? $20 gets you a blaster with a comfortable main grip, an excellent priming handle, and solid construction. Admittedly, I don’t know exactly how fast you could propel darts with the current setup. Even so, given that the Dart Zone Pro Mk2 can propel short darts at high speed with a small plunger volume, swapping out the salt part with a breech of some kind should produce good results. With tweaking, Buzz Bee Toys could have a fun dart blaster on their hands that, while not the most efficient thing ever, would be tons of fun and easy for people to justify buying.

In the end, I look at the Bug Hunter and wonder what Buzz Bee could do, if only they set their collective minds to it.