That’s all from Toy Fair today. In the meantime, we have another press release with official images of new Overwatch blasters for Mei, Lucio, and Roadhog. 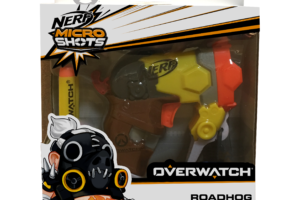 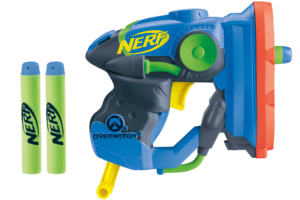 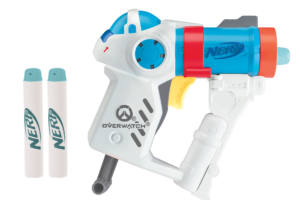 I’ll be updating this post as the day goes on. Pictures from booths, actual tour of Zing and Far Out Toys (Drone Slayer), and more. Stay tuned!

END_OF_DOCUMENT_TOKEN_TO_BE_REPLACED

If you have looked at blaster shelves at any time the past year, you may have seen a blaster that fires wads of toilet paper. The Skid Shot, as it was called, had a nice plunger tube and spring to power it, but ultimately took many steps to fire a single shot.

This year, Jakks Pacific is introducing an upgrade. As per the press release:

Toilet Paper Blasters™ Sheet Storm™ transforms toilet paper into clean spitballs. It features rapid-fire pump action to blast spitballs up to 50 feet! One roll of toilet paper makes 350+ spitballs for non-stop blasting action! Kids over the age of eight can wipe out the competition for $39.99.

That’s double the price, and yet…oddly fascinating. And you have to love the sense of humor involved with the name. And there is, in fact a trigger, so this isn’t just a matter or pumping and spraying (paper). Even if it’s something you’d never see in a normal Nerf war, it’s just as much in the same silly spirit.

I’m going to be posting updates pretty regularly throughout the Toy Fair weekend, so stay tuned!

It’s the day before Toy Fair, and while I’m sitting in an airport, all the official press releases are starting to filter out. In this case, Hasbro gave first dibs to IGN (since this is a video game crossover, after all). However, Hasbro is also relaunching their Pulse service, acting as a hub for all their new IP (Nerf, Transformers, etc) that will offer preorders, as well as perks for the “Premium” version. Let’s jump in!

END_OF_DOCUMENT_TOKEN_TO_BE_REPLACED

This is just a notice for fans of the site – I’m going to be busy between the actual job and preparing for my trip to New York! There’s lots of reviews I still need to do, but I only have so much energy right now. So I’ll just focus on the essentials.

And of course, if for some reason Hasbro or another company decides to do a press release on new items, I’ll find time to squeeze it in here.

Coverage will start on Friday, even if it’s more of a “Traveling to NY” post!

If you keep track of Buzz Bee Toys’ social media, you’ll have seen this post today featuring their booth at a toy fair in Germany. In it, we have lots of their current blasters on display, but also some new ones – which hopefully we’ll be able to see and play with at New York Toy fair!

See also some analysis by other blaster fans in this Reddit thread.

END_OF_DOCUMENT_TOKEN_TO_BE_REPLACED

We have quite a few blaster officially announced by Hasbro prior to Toy Fair (regardless of blaster “leaks”, Hasbro is a corporation that operates on it’s own schedule). I’ll have the official release text posted after work (I still haven’t quite mastered the subtleties of the touch screen). In the meantime, here are some pictures and info!