Since the Nerf N-Strike Elite Mega Thunderbow was first announced ahead of Toy Fair earlier this year, we’ve been fairly vocal about our uncertainty regarding this blaster’s place in the Nerf line-up. In fact, we somewhat jokingly suggested 2014 might be “The Year of the Bow,” given how many products were being released to time with the rise of bow-touting pop culture protagonists from the likes of The Walking Dead, Disney’s Brave, The Hunger Games, and The Avengers. But time has passed, and we’ve had several opportunities for hands-on time with the Thunderbow, which has softened our position slightly. Still, we wondered if a “bow” that had more in common with typical Nerf blasters than anything relying on drawstring tension was worthy of the $39.99 price being asked.

We’re told by Hasbro executives that the new Mega Thunderbow came about because research indicated boys wanted something like the Rebelle Heartbreaker Bow, but designed with a look and feel specifically for them. One obvious strategy would have been to do a re-shell/re-color of the Heartbreaker and release it under the Elite brand. But Hasbro went a different route, and engineered something that would aim to go a good bit farther–both figuratively and literally. The Mega Thunderbow was born from this input, but it did not receive a warm welcome. In fact, the Nerf Internet Community expressed an almost immediate disdain, with comments on the Nerf sub-Reddit like: “Nothing about this looks even vaguely appealing…” (Landgrave Customs), “…a horrid addition to the MEGA line” (Duke Wintermaul), and “I don’t get it” (Nerfenstein). On and on it went, and even we publicly expressed our skepticism. Now the Thunderbow has been released for purchase, so we brought one in for testing. 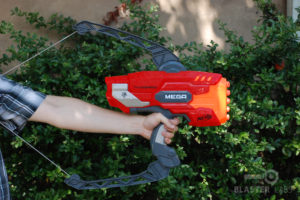 Unlike most Nerf products under the Elite and Mega brands, the Thunderbow is packaged in such a way that much of its body is visible on store shelves, as are the 10 Mega-branded darts that come in the box. This change in approach might signal a perceived need for the Thunderbow to differentiate itself from other Nerf blasters that are typically designed to look more like “guns” or “blasters.” Hasbro has also told us that the Zombie Strike Crossfire Bow has been a huge success at retail, so they would probably like the to see if the “bow” part will lead to further success with this new product, as well.

In this case, however, showing more of the product might not necessarily be a good thing. Most of the people in the Nerf community with whom we have discussed the Thunderbow feel as though it is not balanced-looking, with oversized proportions and an overall aesthetic that is not in keeping with many of the more functional, vaguely mil-sim feeling Nerf blaster products. We would have to agree. The Thunderbow is imposing-looking, sure. But that’s just because the body is big, not because it looks particularly bad-ass. In fact, we’d say it looks kind of goofy… and goofy rarely equates to feelings of power or desire. Then again, it IS big, and that alone will probably help it sell.

The Mega Thunderbow is relatively easy to handle, with a well-formed, comfortable grip. The weight of the blaster’s body is balanced enough that fatigue won’t be a huge issue. But when it comes to firing, things get a little weird. Hasbro has thoughtfully placed painted indicators on the bow string to show optimal finger grab locations, but it doesn’t really matter. One simply draws the string back in whatever manner one feels so inclined until the priming mechanism is cocked (as indicated by a small window on the back of the blaster body that shows green when primed), and then every shot is more or less identical. The Thunderbow’s “dynamic arms” are attached to the plunger system (unlike some previous Nerf products that had the bow strings attached to the plunger system), so the strings essentially serve as a fun way to move the arms that prime the plunger. The blaster is fired once the strings are released (allowing the arms to spring forward).

There is definitely more of a tactical quality to the Thunderbow than some Nerf blasters (particularly motorized ones), but compared to something like a Z-Tek Bow, it still feels oddly isolated from the action of firing. In other words, the draw of the “bow” has little to do with the distance of the shot once cocked. And for anyone who has used a real bow-and-arrow (and who hasn’t?), that feels disconcerting. Indeed, that’s the reason we’re inclined to call the Thunderbow a “blaster” versus a “bow.” It has arms and a bowstring, but it fires like a traditional blaster.

Still, the act of pulling back a bowstring does give this blaster a totally unique feel. It’s possible to fire “dud” shots that only go a few feet by only pulling back the bowstrings part way, which implies that the string pull is indeed related to the shot distance. But again, that kind of goes out the window once the cocking point is reached, at which point no additional amount of draw will result in further distances. No amount of Herculean strength will make darts fly any farther or faster–each full pull delivers the same punch.

So, the Thunderbow isn’t really a bow, apart from aesthetics. And no amount of technique change or string draw will result in appreciable performance differences. And that all feels very weird for a “bow.” Yet, as a blaster, the Thunderbow is still impressive. In our tests on a clear day at a local park, we conducted a series of shots back-and-forth across an open field (we fired in opposing directions to get our distance readings, much like how supercars must make passes in both directions for top speed records). And the results surprised us: 92 feet… 96 feet… 101 feet… all the way up to an incredible 110 feet, 6 inches! This is one of the first Nerf products in some time that not only reached is claimed distances in our testing, but actually exceed them. In this case, it beat its claimed max range by a full 10%! Granted, we had to do some crazy arched shots to hit those distances, but we hit them, nonetheless. 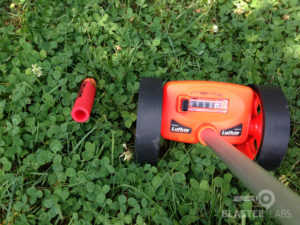 Accuracy over 100-foot distances wasn’t great, with shots typically landing a good 15-20 feet apart (or more), but wind and other variables can certainly be a factor at those ranges. And with an average velocity of 75 feet per second (85 FPS, max), there’s only so much momentum in those foam bodies and rubber tips to keep things flying straight. In that regard, products like those from Zing typically fair much, much better.

Of course, being a “bow,” one can’t expect a very good rate-of-fire. But here again, the Thunderbow surprises, largely because of it being more of a blaster than a bow. By holding onto the drawstring and simply pulling forward and back in quick succession, we managed the equivalent of a fairly stunning 3.5 darts per second! We did find that if we went too fast, the second shot would often miss completely before moving onto the third. But if we timed it well, the results were impressive, since we could empty the entire 5-dart capacity in under 1 1/2 seconds. With a limited capacity of just 5 darts, this is still not going to be any kind of primary weapon, but the rate-of-fire was nonetheless eye-opening, considering the intended function.

The Mega Thunderbow comes in at a fairly salty $39.99 price point. Frankly, we wish it were about $10 cheaper, given the minimal functionality on-hand. There isn’t a single tactical rail in sight, the engineering is fundamentally based on existing internals, the ammunition is not unique, and actual uses for such a product are pretty limited. We’ve seen pricing creeping upward with the Nerf Cam ECS-12 at $79.99 and the recently announced Rhino-Fire at $99.99, and this trend has many in the Nerf community concerned. We don’t believe the Thunderbow will allay any of those fears, unfortunately. Perhaps the “Mega” name is being positioned as a top-tier product by Hasbro, but the Mega Magnus, while not comparable in performance, is considerably less expensive, and at least as much fun.

Which brings us to the big question: is the Mega Thunderbow an enjoyable product? Is it one that you will keep coming back to after the first use? It certainly delivers in performance, and it lives up to its “Mega” billing in aesthetics. And it’s cool that Hasbro tried to go big-and-bad when boys asked for a bow-type product. But, at the end of day, the Thunderbow still isn’t really a bow. It kind of looks and feels like one, but it doesn’t have the same dynamics as a real bow. And in some ways, that makes it not as much fun to use as one would expect. It’s also expensive… for many, we expect prohibitively so, for something so different than a typical Nerf product that is a known quantity. Which all leads us to wonder if those boys that asked for a bow were really asking for something like the big, expensive, faux-bow product like the Thunderbow, or if perhaps they were really asking for something a bit simpler, a bit less expensive, and a bit more like a real bow. Perhaps Hasbro should give it some additional thought, and in the process, take another look at the Rebelle product line (with Elite-level performance) for inspiration next time around.