Here we are, leaving Toy Fair, and looking back on all the things we’ve spotted and played with. There were lots of winners across the various companies, but there were also lots of things left unseen and unannounced; lots of blaster news won’t appear until later in the year. Even so, we can highlight the best things there, and what we’re looking forward to seeing! 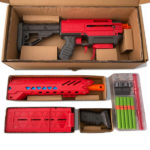 The first (and possibly most interesting) thing we saw involved the Dart Zone Pro. Not only was there going to be a Mk. 1.1, but it was going to be available online at Target starting during Toy Fair! Granted, an issue with the inventory system ended up negating some of the excitement, simply because Target’s website isn’t allowing people to actually order them. If you really want one, there is a workaround to get on a waiting list. Even with these issues, launching a hobby-grade blaster at a major retailer is a huge step for Prime Time Toys, and signals that there’s possibility for expanding a niche market into the mainstream.

We can, of course, expect to see more about Dart Zone blasters later in the year; they’ve just launched items through Dollar General (the Storm Squad and Apex blasters), and are working on several more (as well as selling former Walmart exclusives to other retailers). Then there are the things that are technically public knowledge but still happening behind the scenes, like this dart blasting monstrosity, or fun trademarked names like the Aeon Pro and Nexus Pro. We eagerly await news!

There were, of course, fun announcements like limited edition Fortnite blaster skins and some tie-ins with other IPs. However, the biggest and best things Hasbro had on hand fired the, well, biggest and best things. At last we have a semi-auto Mega blaster, and one that uses magazines! The fact that it maintains Centurion magazine compatibility is the biggest win. I’ll have to detail my adventures in Mega blaster loadouts in the future to properly explain why I’m so excited, but let’s just say I want one of these as soon as humanly possible; having one on hand would basically define my Humans v Zombies loadouts for the next few months, including at Penn State and Endwar.

The other “big” reveal was the Fortnite GL – at long last, we can rapidly fire Demolisher rockets! Granted, if you’re old enough to remember things like the Arrowstorm, Ballzooka, or the Lanard Big Salvo, you know that firing lots of large ammo in quick succession is nothing new. But in the modern era of foam blasting, that’s been severely lacking. And while $60 is expensive, it buys a lot of plastic, a comical blaster shell, and an absolutely silly and fun experience. Practical? In all likelihood, no. But I still absolutely have to have one!

Oh yeah, and there was that one Halo-themed line…no way that that will ever sell to all of us blaster and video game fans, right? RIGHT? (Proceeds to set aside part of future budget for MA40 and other upcoming blasters)

Buzz Bee’s event was, in many ways, similar to the Dart Zone booth. They already have lots of successful products out, and several of the “new” blasters are already on shelves, due to retailer demand. Even so, they had plenty of things in the works, especially for Walmart. I look forward to the Rebel Mech actually making it across the ocean from China, because $25 for a full-auto blaster and a 30-dart drum is an absolute steal! Quarantines keeping the samples in China is a downer, but it’s still the best item that wasn’t there.

I’ve also got plenty of Buzz Bee’s new darts hiding in my luggage for testing back home; from the limited experience firing them, they do seem to be far better than the standard Long Distance darts, and with any luck, they’re be the new default going forward.

Of course, there are a few other things they’re working on…but they can’t talk about those yet. 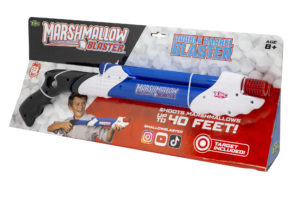 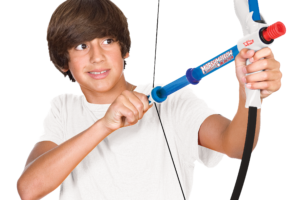 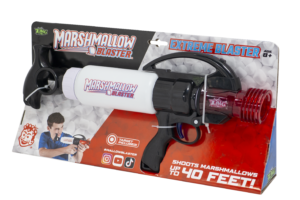 The rest of the show had some good things on display, even if many of them aren’t technically new. Zing owns Marshmallow Blasters now, and they’re releasing the current crop in fun colors, including some with translucent parts. They’re also seen massive sales with the Zax and Hyperstrike lines, and are looking to capitalize.

Zuru has so many things going on, between blasters, water toys, and llama dolls, that they were busy the entire fair. I didn’t get to see anything, but a few others did. I’m not completely sold on the manual chain-fed blaster…but that mechanism is so hilariously fun! See Drac’s video for more details. Plus, we have the the partial gold Chaos blasters appearing at Target later this year, and rumors of a Dinosaur-themed line…

Finally, there were some things that were just really nice to see. Do I personally have use for the BUNKR products? No. But them snagging the Nerf license and being able to make strides toward improved barriers and products is good news! (Not to mention that NBL season two is still a possibility) Hog Wild having actual sticky targets? That’s cool! Even if some of these products aren’t high on my list, their very existence is a good thing for lots of other blaster enthusiasts.

That’s a wrap for now; I have a plane to catch. Enjoy life after Toy Fair!