There’s not much left for me to cover; sadly, I don’t think I get to see any of Zuru’s stuff this year. Even so, there are a few other items to see. They might be in stores near you, they might be slight updates…and a few might leave the head scratching. Here we go!

The Nerf Scooter is still a thing! I got one last year and enjoyed it – given its size and performance, I’m clearly not the target audience, and in stock form it wasn’t too useful. Didn’t stop me from tearing it apart and using it at events, however!

This year, however, they had a few on display, with various magazines all loaded and appearing to be secure! That was by far my biggest issue – the old version had such exacting tolerances to the retention mechanism that a lot of long magazines and drums simply would not engage. I’m glad to see that has been improved! 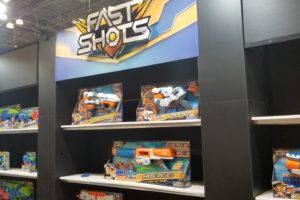 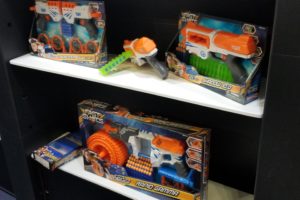 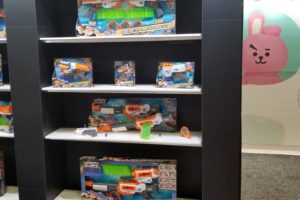 For starting a line, some of the blasters are admittedly derivative. But Happy Line Toys has plenty of options to choose from, with especially nice, cartoonish color schemes to complete the toy aesthetic. The springs are sufficiently stiff for performance. I personally love the orange, white, and blue. More importantly, they have three brand new blasters in the works as they move in their own direction. I’ll be looking forward to seeing more of these on shelves in the future – I’ve only ever seen one of them appear in the Midwest, and that was at a bargain outlet. 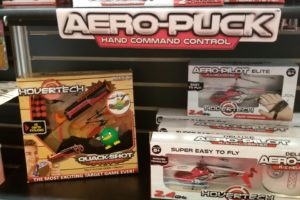 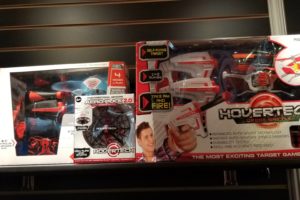 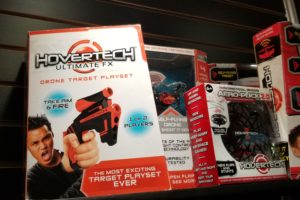 Hovertech items have appeared on various shelves over the years, and in different variations. For example, the “duck hunting” variety has had at least one version on Bass Pro shelves. This year, however, they’re pushing farther into actual drone space with radio control. The newest version of Hovertech has a drone target that can hover in place, of course, but it can also be controlled by one player and made to do stunts and the like, evading the other player’s darts. 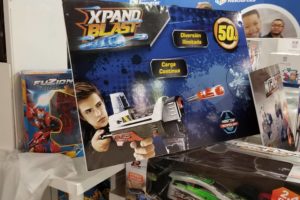 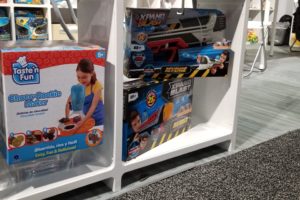 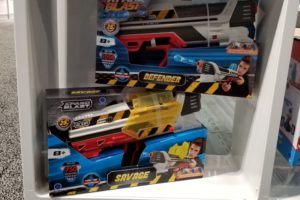 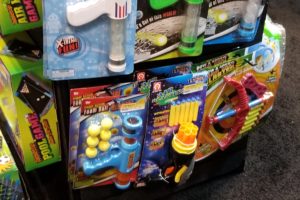 Walking around the Toy Fair Showroom, you still see some things out of place. Like a Latin American distributor displaying what are years-old gel ball blasters (anyone remember the Xploderz line?). There are novelty toy companies with ping pong poppers and old dart shooters that have appeared on shelves for years in discount stores.

There are some companies that have blasters on display, but nothing truly new. For example, the Maxx Action line was on display in the booth for Sunny Days Entertainment – many were at Kohl’s last year, but almost all were old designs from Chinese manufacturers, and none were truly noteworthy. The same applied to World Tech Toys and their World Tech Warrior line.