2020 wasn’t the greatest year for doing Nerf events; beyond small isolated events in backyards or parks with low numbers of people (and masks and sanitizer), it was hard to actually use all the new blasters. As a matter of fact, I’m still behind on trying new versions of things (Sorry, Zing. I promise I really do love Marshmallow Blasters!).

Even so, 2020 was, in many ways, the year the dart blasting hobby became accessible to the public. Lots of manufacturers jumped into the high fps arena, with many models below $100. At the same time, the low end of the hobby (typical stock fps blasters on store shelves) saw a large shift toward other companies, notably Dart Zone. And somehow, Ultra has grown on me. Here we go!

Blaster tag has seen a shift over the past five years; blaster modification has shifted from old school methods (homemade, modified using spare parts and hardware, etc) to kits and complete internal replacements (motors, wiring, etc). 3d printing has added a new dimension to this, but still requires expending time and money for competitive blasters, even if you’ve already passed the sunk cost of buying 3d printers. 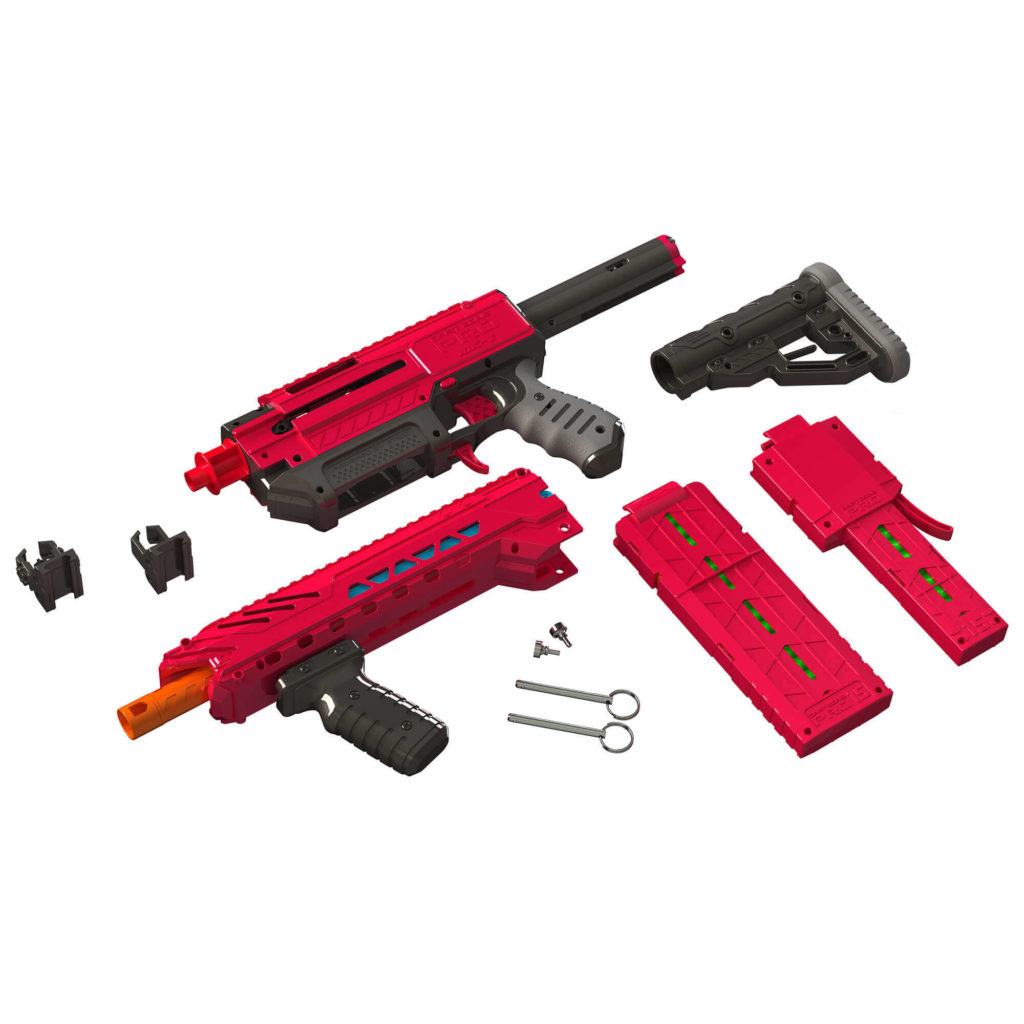 This year, however, high-fps blasters have not only become widely available, they’ve also found a place on store shelves. Dart Zone continued the Dart Zone Pro line with the Mk1.1 in February, and the Mk2 this December. Both are “premium” blasters, both in construction and price, and only online, but the fact they’re available through Target’s website is significant.

The Ceda S platform saw a resurgence with the release of the Gameface Prime this summer. Velocity Outdoor’s remix of that particular Jet blaster ended up being quite fun to use – even with the many other options I have now, I’ve grown to prefer the comfort and ergonomics of the Prime. That blaster ended finding space on the shelves of sports and farm supply stores, places where Velocity Outdoors (Crosman brand, etc) already has an established supply chain. It also marked short darts and magazines (Quik Darts and Katanas, respectively) appearing on shelves.

Finally, Dart Zone hit us with even less expensive high performance base models, thanks to their partnership with Walmart. The Adventure Force Nexus Pro, the Aeon Pro, and the associated short darts all appeared on store shelves, to massive critical acclaim. $50 for a 150fps primary, or $25 for a 150fps large pistol? $10 for 100 darts that perform well and can be grabbed off the shelf the day of an event? They may not have as many upgrade options (yet), but they’ve made it easy for newcomers to just grab a blaster and play.

Yes, I realize Ultra didn’t have the greatest start. Many people had blasters that couldn’t match the range claims. Even now, the packaging has lost the claims about accuracy. And yet, somehow, as more models have been released, Ultra has become more fun to use. The Three, while an ergonomic nightmare, is silly fun to use. The Ultra Pharaoh shoots hard, introduces removable magazines…and is quite usable. Sure, the darts are still expensive, and I scour the grass after a fight to recover them all, but it’s become a lot more fun – ESPECIALLY with the Sonic Screamers.

I’ve at least reached the point where I’ll keep a small bucket of Ultra darts, and have a loadout ready for Humans v Zombies when it returns.

Will Ultra stick around? That question is still up for debate. But I still see another year out of it, at least.

Hasbro has been pioneering cheaper blaster manufacturing techniques, to the point of having a patent on it. First we saw Alpha Strike, the budget line that was…okay, but had some terrible ergonomics to start. Turns out you can’t really skeletonize a blaster grip and maintain comfort. That line persists, and the process has translated over to the Elite 2.0 line. Everything from clipped/solvent welded bodies to plastic leaf springs where possible. Even so, this has led to a host of issues, from parts feeling cheap to magazine releases being painful to operate. Some reviewers had blasters snap far too easily. Even traditionally-designed blasters like the Motostryke are seeing the plastic springs, as well as (in some cases) operational issues.

Meanwhile, Dart Zone seems to keep pumping out brand new models at budget prices, and remixing a few old ones as well. Why get a Shockwave when you can pay $20 to fire 40 darts from a Magnum X2 or a Villainator? Why get a Phoenix when the Spectrum performs better at the price point? Dart Zone, being a smaller competitor, is in the unique position of being big enough to do some experiments (starting the Dart Zone Pro line), but still small enough that they have to consistently make good blasters in order to maintain market value. And even their weakest offerings aren’t bad, even if they have a unique flavor that may not appeal to everyone.

Meanwhile, you can’t count out Buzz Bee Toys. The Spectrum may be slightly better to some, but it’s also online only. Meanwhile, the Rebel Mech is on the shelf for the same price, works well, and comes with a 30-dart drum. And their other blasters continue to show up in various places. 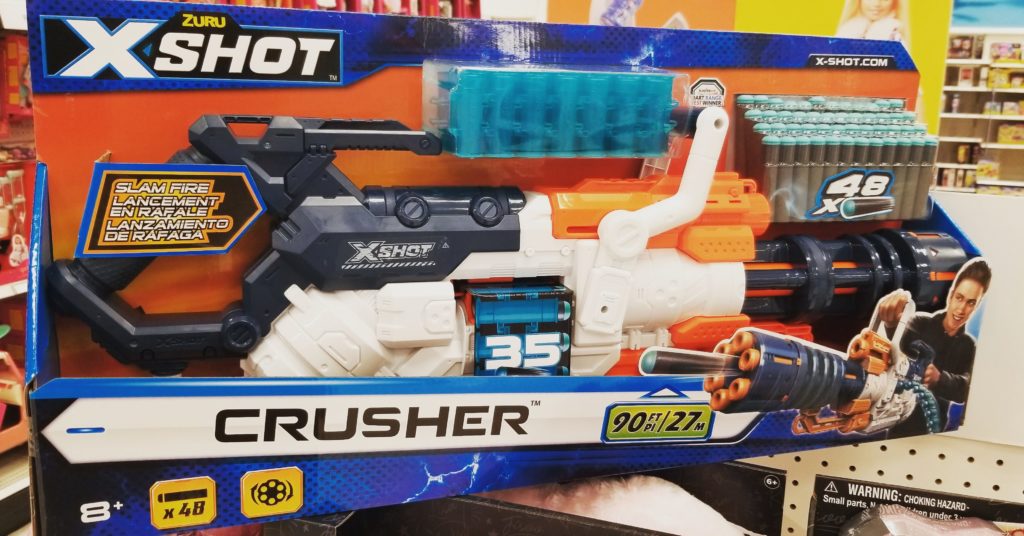 Xshot doesn’t innovate quite as quickly (the Dino Attack Line is a rehash of Bug Attack, even if it improves it), but items like the Crusher are hard to ignore. And Zing is putting their own unique spin on Marshmallow blasting.

The next year is going to be interesting. So much of the toy industry things we come to expect (Toy Fair, etc) have been postponed or moved online, making social media marketing even more important. At the same time, hobby events have been scaled back or canceled, as well. Humans v Zombies currently doesn’t exist, and if there’s a war, at best there’s ten people. I sincerely hope things get resolved next year. I REALLY want to shoot my friends with all the cool new things that come out!

And Hasbro: I understand that little bits of manufacturing savings add up, but there’s inherently a limit to how much you can save before the product becomes noticeably worse. The Halo MA40 was a great product. The Phoenix? Not so much.